AFLW player Haneen Zreika will not be named in the Giants’ team to play against the Western Bulldogs on Friday night after deciding she could not wear the club’s pride jumper for religious reasons.

Zreika, 22, has been grappling with whether to wear the jumper, which AFLW players wear to recognise and support the LGBTQI+ community, all week before reaching her decision. 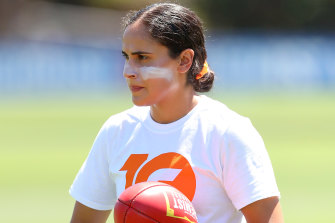 Haneen Zreika will sit out round four after making the decision not to wear GWS’ pride jumper.Credit:Getty Images

Sources said the small forward has explained the reason for her decision to her Giants teammates, who are understanding of the position she is in and accept that she supports them on a personal level.

However, the club is absolutely committed to pride round and the importance of wearing the pride jumper to show their support for the community.

The club and the AFL have been working closely with Zreika and supporting her as she reached a position this week, aware of the difficult decision she faced.

They and her teammates are continuing to support her and are hopeful she will attend the match, which is being held at Henson Park.

The Giants are not making a comment at this stage as they prepare for the vital match. Teams will be announced at 5pm on Thursday.

Zreika, who became the first Muslim to play in the AFLW when she made her debut in 2019, stood in a photo endorsing pride round ahead of last week’s match against North Melbourne.

She has been a pioneering player for the Giants and the competition and has also played rugby league with South Sydney.

She played in last year’s pride round in the AFLW, which is designed to celebrate diversity and inclusivity, but the Giants did not then wear a specific jumper supporting pride round.

The club had decided to wear the jumper in a home match at Henson Park in Marrickville in round four rather than during pride round, as it was playing in Victoria last week.

Zreika is highly regarded for her work within the local community and she is expected to have ongoing conversations with teammates about the issue after this match.

She has played all three matches in 2022, having won last season’s AFLW goal of the year and represented the club in the AFL Women’s grand final sprint. She received coaches’ votes in round one and is a quick, pressure forward.

It is not the first time a sportsperson has made such a decision. American soccer player Jaelene Daniels (née Hinkle) chose not to accept a call up to the US Women’s team after deciding she did not want to wear a pride guernsey because of her faith.

Pride round is a key feature of the AFLW season.

Tanya Hosch, the league’s social policy and inclusion manager, said at the launch the league was “actively building our understanding of what it means to be inclusive in partnership with people across the spectrum of the code and with great generosity of players, officials, staff and fans”.