Greater Western Sydney football department chief Jason McCartney will almost certainly need to explain himself to the AFL after a run-in with umpires at half-time of his side’s loss to the Western Bulldogs at Manuka Oval on Friday night.

The Giants had been trailing in the free kick count 12-4 at the long break when McCartney made his feelings known to officials when he passed them in the hallways of the Canberra venue.

Sources who had been in the vicinity at the time said the long-time official and former Adelaide, Collingwood and Kangaroos player made his displeasure clear to officials, with his comments audible to members of the Bulldogs camp because of the proximity of the respective rooms at Manuka. 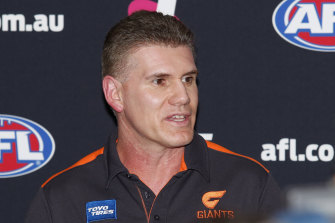 There are varying reports of how hard McCartney went at the umpires from people who were in the vicinity and spoke to The Age and the Herald on the condition of anonymity.

By match’s end, the free-kick ledger had almost been squared, with the Dogs shading the Giants 16-15 in the statistic.

The league would not comment on Sunday morning other than to say it was aware of the situation and to stress the importance of respectful treatment of umpires.

But McCartney is almost guaranteed to be issued a “please explain” by the league, similar to the one issued to Geelong coach Chris Scott over his quarter-time run-in with the Brisbane Lions in round two.

Scott was handed a $10,000 suspended fine for his actions.

Bali bombing survivor McCartney joined the Giants from the Dogs at the end of 2017 having been instrumental in building the Dogs’ premiership-winning list in 2016 as the club’s list manager.

The Dogs-Giants rivalry has emerged in recent seasons as one of the game’s fiercest. Dogs captain Marcus Bontempelli had visible scratch marks on him in a television interview after the game on Friday night but match review officer Michael Christian did not lay any charges from the match.

GWS declined to comment on Sunday, pending the result of an AFL investigation.