Cardiff: Langi Gleeson’s dream of starting a Test for the Wallabies will come true on Saturday (Sunday morning AEDT) when he runs out against Wales in front of a full house in Cardiff.

But only now can the powerful Waratahs back-rower laugh about the day his worst nightmare played out when he missed the start of his first Wallabies training session due to a couple of menacing magpies.

Gleeson had some bad luck on his first day in Wallabies camp earlier this year, one many of his teammates found quite amusing.

Quizzed on the story ahead of a third international appearance, Gleeson confirmed that his back-row comrade this weekend, fellow New South Welshman Jed Holloway, was partly to blame.

“For my first gym session it was like a five-minute bike ride,” said Gleeson of his first day at Sanctuary Cove on the Gold Coast. “I was biking out and Jed was supposed to lead me but then he sped off. I took a wrong turn and there were two magpies waiting for me. They chased me and I had to cycle for five minutes the other way.

“Jed got me, so I came back, then I realised I lost my phone. So I had to go back through the magpies. We couldn’t find the phone, so we forgot about it, came back to the gym and tried finding it after that.” 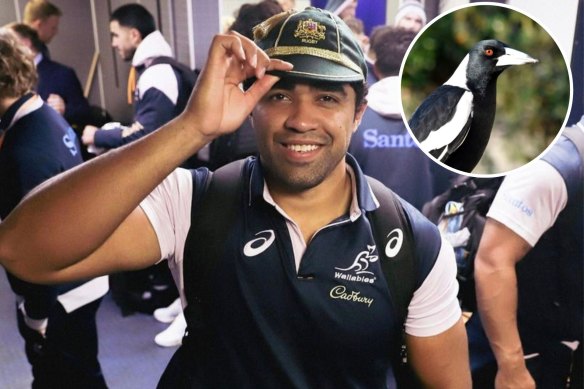 Langi Gleeson had an unfortunate run-in with two magpies at his first Wallabies training session.

Did the coaches criticise Gleeson for his tardiness?

“They were fine with it. They were actually having a laugh,” Gleeson said with a grin.

With Rob Valetini ruled out due to a low-grade syndesmosis injury that flared up in Australia’s 13-10 loss to Ireland, coach Dave Rennie has entrusted Gleeson to wear the No.8 jersey for the team’s last match of the tour.

Gleeson was a late call-up to the Wallabies bench for game one against Scotland and was given a six-minute cameo in the dying stages of a 16-15 win. The 21-year-old also got 14 minutes off the bench against Italy.

“I wouldn’t have believed you [at the start of the year],” said Gleeson, who has played just 154 minutes of Super Rugby for the Waratahs. “It feels pretty good. I didn’t expect it. 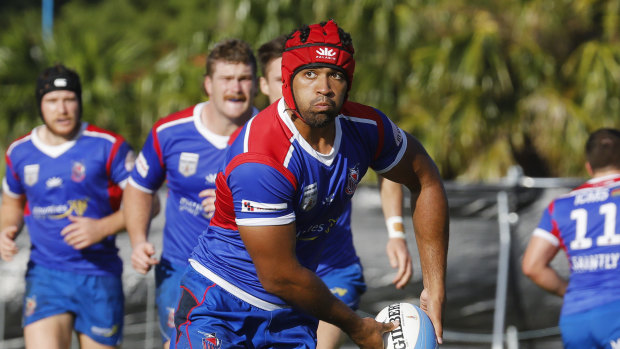 Langi Gleeson in action for Manly in the Shute Shield. Credit:Karen Watson

“It’s unfortunate for [Valetini]. All our main ball runners are injured now.”

Gleeson grew up in Fiji and loved rugby league but has turned heads in the 15-man game for Manly.

“Me and my brother spent 10 years in Fiji then came over here,” Gleeson said. “I went to Narraweena Public School and then went to Cromer [on Sydney’s northern beaches].

“I did a bit of league, then got a scholarship with St Augustine’s College [in Brookvale] and then took the league pathway. I then went to South Sydney for a bit and did two years there.

“COVID kind of cancelled everything out, so I just went back and played union, played colts for the [Manly] Marlins, and then through there I got picked for the Waratahs academy. Then I played the trial game against the Brumbies runners and I got picked up from there.”

From all reports, this is the infamous game where Gleeson bowled over everyone in his way.

“It was a fun game,” Gleeson said with a laugh. “We had a pretty stacked team.”

He’ll be hoping for more of the same against Wales this weekend.

But rest assured, Gleeson will be sticking a little tighter to Holloway this time around.

“He’s very experienced,” Gleeson said. “Seeing him play at the Tahs, he’s killing it. I have full confidence playing with him.”

Watch all the action from the Wallabies Spring Tour with every match streaming ad-free, live and on demand on Stan Sport.