Goldstein has been consigned to a support role this year at the developing Kangaroos and is likely to seek more chances elsewhere. At 33, the former All-Australian’s options will likely be concentrated among clubs in flag contention.

North’s focus on development has this year seen them favour Tristan Xerri as first ruck with Goldstein starting on the bench until Xerri’s recent injury. Goldstein, an unrestricted free agent, finished last year in the top bracket of rucks just behind Max Gawn, with Champion Data ranking him fourth in the AFL. 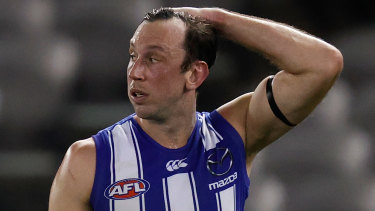 Rory Lobb at Fremantle sought a trade east last off-season due to personal reasons with his partner and while he is contracted until 2023 he is expected to repeat his request this year. He has been good in the Dockers’ wins over Carlton and Geelong in the past fortnight, booting five goals, and was effective in the ruck in the Carlton win. 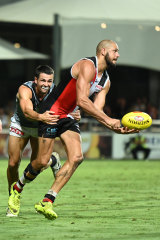 The future of 34-year-old veteran Paddy Ryder at St Kilda remains uncertain. He has only played three games this year as he has overcome Achilles trouble. He played 12 games last year and 14 the year before.

When he is available and pairs with Rohan Marshall, Ryder remains an incredibly important part of a ruck forward tandem system at the Saints. Mature-aged recruit Jack Hayes, who impressed after making his debut this year, has had a knee reconstruction and will be sidelined for 12 months.

Industry sources link Lobb with a potential move to the Saints pending what happens with Ryder.

West Australian pair Darcy Cameron at Collingwood and Tim English at the Western Bulldogs remain out of contract.

Cameron has been suggested for a possible move back to Perth, potentially to Fremantle if Lobb were to move, but Collingwood and Cameron are in contract negotiations.

“Look, I love Collingwood,” Cameron told the AFL website on Tuesday. “I’m keen to stay, but I let my manager sort that out, I haven’t really thought about it. I just want to play my best footy this year and that will take care of itself.”

With Brodie Grundy out injured for three months, Cameron was chosen as his replacement as first ruck. In round one Cameron was left out of the team with Mason Cox preferred as second ruck and forward.

The Eagles are very interested in recruiting English. The Western Bulldogs and English’s manager have met but not begun serious contract negotiations.

The most significant signature of all is Melbourne’s out-of-contract emerging star Luke Jackson. Melbourne has outlined a compelling three-year succession plan for their premiership forward-ruckman to switch roles with Gawn and become first ruck and tall forward as part of their pitch for him to re-sign.

Originally from Perth, Jackson enjoys living in Melbourne and is attracted to staying but is also weighing up if he wants to return to live in Perth at some point. When is the right time to make a move, and what is best for his football development?

Geelong was close to securing a trade for Goldstein at the end of 2019 season but the ruckman chose to remain after North improved their contract terms.

The Roos have been aggressively overhauling their list. Last year popular veteran Robbie Tarrant, who was offered only a one-year deal as a player over 30, left as a free agent to Richmond.