Suncorp Stadium: Tom Trbojevic had his knee heavily strapped and could barely move, but the Manly fullback and coach Des Hasler insisted the gun No.1 would be fine moving forward after the Sea Eagles were treated to an absolute Adam Reynolds masterclass.

Trbojevic looked in pain early in the first half as the Broncos powered to a 38-0 triumph. It was a mammoth 84-point turnaround from last year’s Magic Round clash between the two clubs.

The Sea Eagles superstar only returned from a medial collateral ligament injury last week after being sidelined for a month.

But his right knee was heavily strapped, especially with some fresh white taping around the bottom of his knee, and the cruellest image of how much pain Trbojevic was in came on the hour mark when Corey Oates scored in the left corner.

One camera angle showed Trbojevic barely getting out of first gear and unable to accelerate when Oates looked destined to score. He then hobbled past Oates as the Broncos players broke into party mode.

TV commentators asked why coach Des Hasler was happy to leave Trbojevic on the field when they were no chance of winning.

Hasler, and Trbojevic, played down the significance of the injury, especially with Parramatta and Melbourne awaiting them the next fortnight.

Trbojevic said after the game: “It’s not too bad, I got a couple of knocks elsewhere, we’ll sort it out and be good to go next week.

“It [the loss] is hard to put into words, we weren’t good enough. I’ve got no real words for you.”

Hasler said: “He’s OK, he’s still not quite there at the moment, but he’s OK, and he won’t use that as an excuse. We were just off tonight. He hasn’t [aggravated it], not at all. I can categorically say he’s OK, he’s fine.” 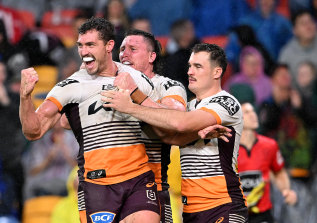 Corey Oates celebrates one of his two tries against Manly on Friday night.Credit:Getty

Captain Daly Cherry-Evans said of his busted fullback: “He trained all week, he hasn’t missed any sessions and is coming along nicely. Whether he got bumps and bruises tonight, maybe, it’s a game of footy … it doesn’t look like it’s got anything to do with what he has done previously. I think he’s all right”

Trbojevic, one of the top three players in the game, continued to create chances on one leg. He made two tackle busts.

Younger brother Ben also sent a scare through the camp when he clutched at his left shoulder before the break, but was able to come out and finish the second half.

As courageous as Trbojevic was at the back, Reynolds was always going to make sure he was kept busy.

Reynolds was nothing short of sensational from the kick-off, which he managed to put over the dead-ball line and force a dropout after splitting Trbojevic and Kieran Foran.

Two minutes later he put through a cross-field kick for the first of Selwyn Cobbo’s three tries.

Reynolds’ best moment came when he finished the first half with a superb chip-and-chase kick for himself before diving over to give the Broncos a 14-0 lead.

The 31-year-old has been a breath of fresh air for the Broncos and the fans. They have now won four on the bounce, which they have not done since 2017, and are every chance to stretch it to five when they take on Newcastle next Thursday night.

The Broncos are happy to admit Reynolds has helped build camaraderie, which has been missing at Red Hill in recent years.

The little master thought he had a second try assist when he shaped to kick, only to pass the ball back inside for Kurt Capewell to reach out for the line. But replays showed Capewell spilled the ball.

There were jokes about handing Reynolds the keys to the city. Plenty of people back home in Sydney would be just as happy to still cut him a spare set for Redfern.