Adam Goodes has rejected entry into the Australian Football Hall of Fame.

Sources familiar with the situation confirmed the dual Brownlow medallist and Sydney great had been voted unanimously into the hall of fame as part of its 2021 intake, the first year he has been eligible since his acrimonious retirement at the end of 2015. 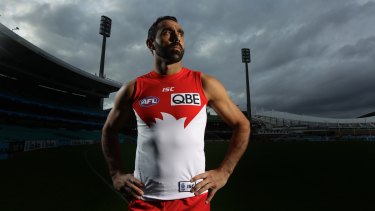 Adam Goodes has declined invitation to the hall of fame.Credit:Wolter Peeters

However the 372-game Swans champion declined to enter the hall of fame this year.

Goodes’ decision comes on the back of his tumultuous departure from the league. The AFL subsequently apologised over its handling of Goodes’ relentless booing by crowds in 2015.

The subject of two documentaries released in 2019, Goodes was a victim of racism during his time in the AFL, most notably when called an ape by a young Collingwood fan in 2013 and then days later the subject of Eddie McGuire’s infamous King Kong gaffe.

Tags: declines, Fame, Goodes, Hall, I, of
You may also like
Latest Posts