Melbourne coach Simon Goodwin has defended Bayley Fritsch amid claims by Dermott Brereton that the Demons’ forward is a “faux tough guy” who is earning a bad reputation.

Brereton, the Hawthorn premiership great and hardman, this week took aim at Fritsch after the Demon took out Denver Grainger-Barras in a marking contest on Saturday which left the young Hawk with a popped shoulder in a drawn clash.

Brereton said this followed incidents involving North Melbourne’s Tom Powell, when a Bailey fend-off left the Kangaroo with concussion. He was offered a one-match suspension by the match review officer but was cleared to play after he took the case to the tribunal. Brereton also cited an incident in which Fritsch pushed Essendon’s Nick Hind into the point post.

“Last week we were talking about faux tough guys and we mentioned a couple. Now Bayley Fritsch is a seriously talented player, but he’s getting a little bit of a bad rep,” Brereton said on SEN.

“He’s got a bit of a track record … Bayley Fritsch is a serious player, but he has some form when he’s taken on the opponent when perhaps that’s not what he should have been doing.”

But Goodwin on Wednesday defended a man who has a club-leading 35 goals this season. 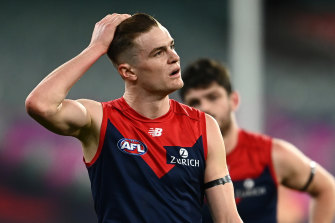 Bayley Fritsch of the Demons.Credit:Getty Images

“It is completely no issue. Bailey is one of the fairest, cleanest players I have seen in the game. He is doing everything right,” he said.

“People look for things to talk about and, clearly, this is a thing, one to talk about, but it’s not an issue from my perspective. As I said, Bailey is the cleanest, fairest player that I have come across and he will continue to be that way. It’s his nature, the way he plays his footy.”

The Demons will hope Fritsch continues to have an impact on the scoreboard in a Saturday night blockbuster against the Western Bulldogs at a closed Marvel Stadium. The league-leading Demons have two wins and a draw from their past five matches but Goodwin insists their belief has not been shaken.

Up until round 12, the Demons had been ranked No.1 in overall pressure and post-clearance pressure, but they have since slipped to No.6.

Rebounding defender Christian Salem had been the No.2 ranked defender up until round nine but has since slipped to No.62, because of a heightened focus on him where he has become the target of defensive forwards.

Goodwin said Salem had been impacted by injury and had been managed “through some situations” but his form was still “pretty strong”.

“I think there has been a pretty harsh chat on Christian. His form still is pretty strong. I know some of the Champion Data ratings and systems and the stats people come up with aren’t probably to the level it was,” he said.

“Christian missed a game of footy probably only about six weeks ago. He was a little bit sore. He had some modified training, the last few weeks he has got his training back to a high level. So, I am sure Christian is going to have his really high games … in the remaining part of the season.”

The Demons have three defeats (Greater Western Sydney, Collingwood, Adelaide) and a draw to teams outside the top eight but their ability to thrive against fellow premiership contenders has been strong.

They beat the Bulldogs by 28 points at an empty Marvel Stadium when the teams last met in round 11 – Tom Liberatore was a particular focus – and they will again look to suffocate the Bulldogs’ run from clearances and attacking avenues.

Bulldogs coach Luke Beveridge later said he looked forward to the round-20 rematch at the MCG but this has been shifted forward a week, and transferred to Marvel Stadium, because of Melbourne’s latest lockdown.