At some stage during the second half at McDonald Jones Stadium on Friday evening, Trent Barrett must have leant back in his chair inside the visiting coach’s box and quickly realised what a monumental job he has on his hands. 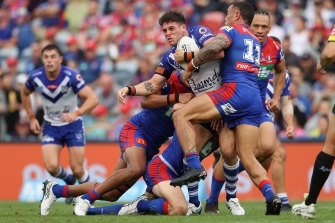 “You can’t turn the ball over in yardage and give teams free shots at you.

“I need a bit of clarity on the six-to-gos because we got pumped. I’ll find out about that and the penalties. I have to ask the question because it put us under a lot of pressure.”

For the Bulldogs, one of the few positives was some nice touches from new No.7 Kyle Flanagan.

Flanagan summed up the situation perfectly with a cut-out pass for an unmarked Dallin Watene-Zelezniak to open the scoring in the fifth minute. 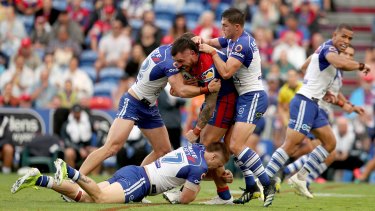 He also held up the ball for a spinning Adam Elliott to get past Mitchell Pearce for their second.

The former Sharks and Roosters playmaker put through a few decent kicks and was happy to be on the end of some brutal shots. His opposite, Mitchell Pearce, certainly did not miss him early in the first half.

“I thought he was our best player, he tackled well, he had one poor read, but his kicking was really good and he had a hand in a few tries,” Barrett said.

The Bulldogs conceded a disappointing try to Mitch Barnett just before the break and then had just 35 per cent of possession for a decent chunk of the second half as they eventually ran out of fuel.

They were just lucky the home side were running out of fit troops. Canterbury were punished nearly every time they made a handling error.

A Nick Cotric knock-on led to Saifiti’s first try. A second Cotric error, which came about when he was belted by Hymel Hunt, paved the way for the Knights to kick a penalty goal.

A Corey Allan knock-on and loose carry by prop Ofahiki Ogden paved the way for the Knights to make the most of the good field position.

A storm swept through the Hunter just before kick-off and the Dogs ran with a strong wind behind them.

Barrett was never going to turn things around overnight. He deserves time and will be given that. The club keep making plenty of noise about wanting Penrith’s Matt Burton, but No. 6 Jake Averillo had decent moments against Newcastle. 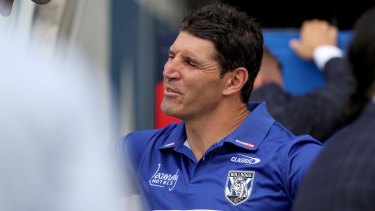 Barrett knows next Saturday’s clash against Penrith will be tough given he was Ivan Cleary’s assistant last year.

“They’re a good side but it doesn’t matter who we play, we can’t do what we did tonight, and that’s turn the ball over in yardage,” he said.

It was the third time in four seasons that the Dogs have conceded 30 points or more to start their campaign.

Newcastle coach Adam O’Brien had much more to like about his side, with Saifiti excellent along with David Klemmer, who racked up 200m.

The injuries, however, were a concern. Mann clutched at his left knee and was forced from the field approaching the half hour.

“I thought it was just a knee clash [with Flanagan] but then I tried to run on it and it felt unstable,” Mann said. “They think it might be my medial. I’ll go for scans tomorrow.”

Best came from the field in the final 15 minutes with an ankle injury.

Canterbury’s school teacher debutant Brad Deitz was forced from the field in the second half when a galloping Saifiti charged to his second try.

Tags: can, Day, for, Ground-Dog, returns
You may also like
Latest Posts