Blues and Broncos enforcer Payne Haas is an unstoppable force on the field, and now he is set to pave the way for players locked in contract battles with their agents.

So much so that he is not afraid of going to the Supreme Court to ram home his point.

Haas is taking on Chris Orr and Pacific Sports Management. The player and his lawyer say he is no longer represented by the company, and now he isn’t even paying them his fees – an amount that would run into the hundreds of thousands over his years represented by Orr – stemming from his current deal that he signed while with them.

What’s more, notice has been provided that his lawyer Abdullah Reslan from King’s Law is seeking to retrieve any fees that Haas has paid the company in the past. That is the issue that could see the parties end up in court but Haas is motivated to go down that path.

Sources have advised that as of Wednesday the Broncos had ceased deducting fees from Haas to pay Chris Orr and Pacific Sports after notice was provided by Reslan.

This column revealed in August that Haas was unhappy with his current salary when compared to what other players were earning. The 21-year-old is a $1million player earning about $600,000. As a result, Haas’ file was obtained and sent to his lawyer where various issues were identified, including how his management deal came about. 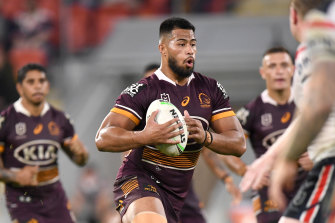 At the centre of the dispute is that Haas was asked to sign a six-year management agreement the day before the NRL’s 2018 player agents scheme was brought in. Under that 2018 scheme, there is no maximum term for contracts between players and agents but after two years a player can terminate an agreement by providing three months’ notice to the agent.

It is understood Haas was not made aware of the scheme when he signed that deal under the old rules, where he would be locked into the entirety of his management contract. Questions were raised about whether the agent was acting in his client’s best interests.

As a result, a termination notice was provided to Orr and his lawyers on Thursday, November 11, giving them until the next Monday at 4pm to take the matter to the Supreme Court to seek an injunction to stop Haas from ending the contractual relationship. That opportunity was not taken up by Orr.

Reslan was contacted but was unable to provide comment on the current matter, other than to say players need to be better informed of their rights, with a specific focus on safeguarding their interests and entitlements. It is understood that Haas has also begun discussions with various parties, including the Broncos, to ensure he is remunerated in accordance with his market value.

League and rugby superstar Sonny Bill Williams will fight AFL great Barry Hall in February with a venue being sourced for the bout in Sydney.

There are few more anticipated local bouts with both sporting giants sure to have fans interested from across the codes where they made their mark.

It’s sure to be a big money-spinner and is significant for many reasons — one of the most interesting elements is that co-promoters Khoder Nasser and Danny Green are set to go with Stan Sport as broadcaster. 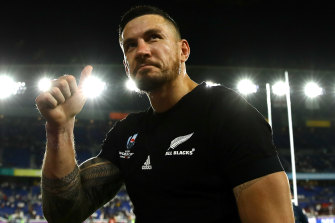 Sonny Bill Williams will take on Barry Hall in the ring.Credit:Getty Images

It will likely be on a new pay-per-view arm of the streaming service, likely seeking to make it an alternative to Main Event on Foxtel.

Both fighters are coming in cold after significant lay-offs. Hall showed in his only professional bout that he has ability in the ring and Williams was taking great strides as a boxer and has a national title.

Williams is so serious about his boxing that he set up his own boxing gym in Sydney’s south and he has been doing plenty of work — he is sure to up that now that a fight is a few months off.

Cronk combo would have boosted my game: Pearce

Mitch Pearce has confessed he would have been a better footballer if he’d stayed at the Roosters and played under Cooper Cronk instead of joining the Knights.

Pearce this week left Newcastle to sign with Super League club Catalans Dragons for a two-year stint, with an option for a third.

In a 309-game NRL career full of ups and downs, being replaced as the Roosters’ No.7 because they didn’t see him as a player who could win them another title was his most crushing moment. It doesn’t get more harsh for a player than that. Watching Cronk guide the Tricolours to back-to-back titles would have hurt.

“I don’t hate Cooper,” Pearce said. “I’ve got all the respect in the world for him. He’s a champion player. If I had’ve stayed there I would have become a better footballer.

“I have no doubt about that as I would have learnt a lot from him. I took the opportunity at Newcastle and grew in other ways.”

The man who ultimately had to let Pearce go was Roosters chairman Nick Politis. It’s significant that Politis and Pearce met up last week because the star halfback wanted to farewell Politis and thank him for everything in his career.

Pearce will even train with the Roosters before heading to France. There is no ill will between the pair. Politis often entertained the idea of bringing Pearce back to the club.

Pearce’s resilience has been his strongest asset and that’s what has defined his career and life.

“There’s been some things I’d like to do over or take back but my life has always been about silver linings,” he said. “That’s how my family brought me up. To bounce back.”

An unprompted admission to Nine News during the week that the cancellation of his wedding and breakdown of his relationship with Kristin Scott informed his decision to quit the NRL reflects the honesty he has displayed throughout his career.

Pearce has lived his life in the media spotlight as the son of league great Wayne Pearce. There is no question the pressure of growing up in the spotlight took its toll on him. It would be impossible not to be impacted by the invasion on every part of his life.

Pearce made well-publicised mistakes during his career – but he has always faced up to his part in them. After a drunken Australia Day incident in 2016, for which he was fined $125,000 and suspended for eight NRL games, Pearce went into alcohol rehabilitation.

When he returned he did a dozen or more in-depth interviews baring his soul. It was impressive to see, but also painful to watch. Like with everything in his life and career, he owned it and returned to his best form on the field.

Best in the west?

The NRL has nailed it when it comes to everything COVID – but it’s hard to understand the decision to reward Perth with an Origin match next year. There are very few in the eastern states who could possibly be fans of the way the West Australian government has handled the pandemic. Not allowing families to enter the state to see loved ones for huge periods has been hard on so many.

The NRL has to know this and realise that Melbourne missed out on Origin last year – as did Sydney for that matter. Giving the Victorian capital a game would have seemed right. Or from a Blues point of view, two games in Sydney to make up for three in Queensland last season would have been fair. Plenty in the game are dismayed and bewildered by the Perth move.

This column broke the news two weeks ago about John Asiata’s stance on vaccination and explained his reluctance to get a COVID-19 jab. There has been a lot of speculation about Asiata’s status since then. We can reveal the Dogs sent him a letter of termination about a week ago because he told them he would not get vaccinated.

We told you last week about Adam Reynolds and his corporate popularity. He has now signed a deal with Nine and will feature heavily on the network’s league coverage. It’s a coup for Nine as there will be few more heavily scrutinised players than the former Souths skipper after his move to the Brisbane Broncos. There are a number of other deals in the works for Reynolds, which will make his packaged-up earnings with the Broncos one of the better deals signed by a player in NRL history.

What is a quarter of the Rabbitohs worth? It’s a question being asked after tech billionaire Mike Cannon-Brookes bought that same stake during the week. It’s been put to this column that $20million was the buy-in price. However, that seems high as Manly’s owners were offered $20million to buy the team and knocked that price back.