When the camera came in tight on Adam Reynolds seconds before the most important kick of his career, Andrew Johns was sitting in the Channel Nine commentary box with Daryl Halligan’s voice rattling around his head.

After Halligan finished his playing career with the Bulldogs in 2000, having revolutionised the way goals were kicked with an 80 per cent success rate, he became a black-dot savant, teaching goalkickers of the future how best to land them from all over the park, in all types of circumstances.

He started with Johns at Newcastle in 2001, quickly taking his kicking percentage from 63 per cent to above 80.

Halligan’s best piece of advice when kicking from the sideline with the match on the line: don’t kick too hard.

With four minutes remaining in Sunday night’s grand final against Penrith, in his final match for South Sydney, Reynolds needed a sideline conversion to level the scores 14-all.

Like Johns, Reynolds (82 per cent) is one of the best we’ve seen when it comes to landing pressure kicks from the sideline, drawing them from right to left like a golf shot back between the posts. 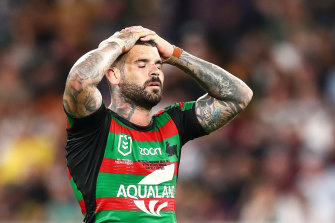 As he lined up the attempt, Johns recalled Halligan’s advice: if you kick it too hard, with the adrenaline coursing through your veins, you’ll eliminate the subtle draw.

“In that position, you’ll never, ever be short, so you don’t have to kick it hard,” Halligan explained to the Herald on Monday. “You want to kick at about 80 to 85 per cent of what you’re capable of.”

Theories that Reynolds’ dodgy groin hampered his attempt are off the mark.

He struck it too well, the ball starting out to the right, drawing back slightly towards the right upright before holding its line to miss by centimetres.

“I honestly thought, halfway through the flight of the kick, that he’d kicked it,” Halligan said. “It started on the right line. He normally shapes it out and it comes in off the right post. It just lost its shape and stayed a little bit out. I’m not sure if there was any breeze. He got the line right, just not the speed of release off the foot.”

Contrast Reynolds’ kick with that of Penrith halfback and Clive Churchill medallist Nathan Cleary in the first half, when he converted Matt Burton’s try a few metres in from the left sideline.

Halligan has worked extensively with Cleary and teammates Burton and Stephen Crichton this year.

“That’s the slowest conversion I’ve seen Nathan kick,” Halligan said. “If you look at how that ball went in flight and the rotation on it, the controlled shape and rotation of the ball meant he got it right. It rotated slowly; it didn’t spin fast. When he struck it, I said, ‘That’s a good kick’.”

After a season of blowouts that exposed the difference between the good teams and demonstrably bad ones, this most gripping of grand finals served as a reminder about how entire seasons can swing on the slightest of moments. 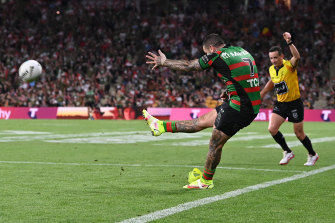 Adam Reynolds could scarcely have struck his late conversion attempt sweeter on Sunday.Credit:Getty

The subtle difference between Reynolds’ and Cleary’s kicks was only one such moment. For Souths, so courageous in defeat, especially after losing forward Jai Arrow to concussion, the video review will show how close they came.

For weeks, the Rabbitohs had kept an ace in their back pocket, turning middle forward Cameron Murray back on the inside against the Panthers’ sliding defence.

When they tried it in the 77th minute of the grand final, and Murray romped through a gap untouched, it could’ve been the play that won the premiership — if someone had been there to support him. If the suspended Latrell Mitchell had been playing, maybe there would have been.

Perhaps no moment will be remembered more than Cody Walker’s intercept pass in the 67th minute.

If he’d passed a nanosecond earlier, the ball thumps into winger Alex Johnston’s chest, he probably scores a try and Souths probably win the match.

If he’d passed short to centre Dane Gagai, he too would’ve been in open space.

Almost every former player to whom I spoke on Monday lauded Crichton’s positioning, standing just wide enough to cover Johnston and just forward enough for his long arms to pluck the pass out of the air above his head.

None were critical of Walker, who has unfairly carried the tag of failing in big matches.

“Sometimes,” NSW coach Brad Fittler said, “the other side is just too good.”

At that point of the match, Souths needed to spark something in attack. They looked dangerous only when Walker had the ball, whether he was digging into the defensive line on the left edge or sparking something from nothing as he did in the first half with his runaway try after fending off Cleary.

If the pass to Johnston comes off, Walker or Murray is the likely Churchill medallist as the best player on the field instead of Cleary.

The word out of Souths, and from those close to the man himself, is Walker is gutted by the result but not his performance.

He deferred contract talks with Souths management until after the season. They will start next week and an extension, even on less money, is expected to follow.

With Reynolds gone, Souths can ill-afford to lose Walker, one of the best in the premiership this year at the age of 31.

Of course, we’re all experts on Monday morning, even those who have been there and done it on the last day of the season.

We wouldn’t have thrown the intercept, we would have kicked the sideline conversion with less force, with a little more curve, we’re all heroes from the armchair.

“I would’ve struck it the same way,” Halligan said of the Reynolds kick. “But I’m too bloody old — it probably would’ve gone under the crossbar.”

Tags: Halligan, reveals, Reynolds, Why
You may also like
Latest Posts