Carlton defender Mitch McGovern has suffered another injury blow, this time re-aggravating a hamstring strain which will have him sidelined for an “extended period of time”.

The Blues revealed on Friday that McGovern, 27, had experienced discomfort during training and had been sent for scans. He will be assessed again next week, but the Blues says he will spend several weeks on the sidelines. 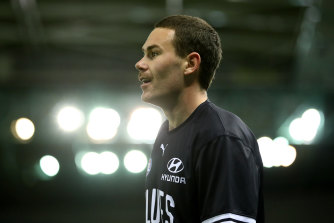 “It is, obviously, really unfortunate for Mitch, he was so determined to get back into the side over the next fortnight and was really looking to have an impact with his teammates on the field,” Blues head of football Brad Lloyd said.

“Mitch had been ticking every box required of him during his recovery, so he’s understandably disappointed with today’s result. Our primary focus right now is on making sure he is OK, and we will focus on getting Mitch ready to have an impact in the second half of the season.”

McGovern played in the season-opening wins over Richmond and the Western Bulldogs where he had impressed in a new role in defence but suffered his initial hamstring strain at training. He was initially expected to miss up to four weeks and return in either round six or seven.

He had not been selected for Saturday night’s clash against North Melbourne at Marvel Stadium.

McGovern managed only five matches last season and 12 in 2020 through a combination of injury and poor form.