St Kilda are no longer in contention for Tayla Harris, who now is likely to request a trade to Melbourne to continue her AFLW career next season.

The Saints had shown some interest in the forward but sources familiar with the situation confirmed on Thursday that they are no longer in the running to land the high-flying Queensland product, who is on the hunt for a third AFLW club after negotiations between her camp and Carlton broke down last month. 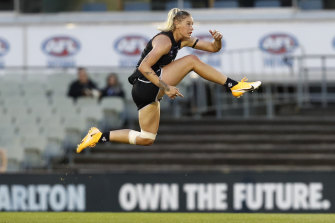 Tayla Harris in action for Carlton in January this year in an AFLW match. Credit:Getty Images

Sources said on Thursday that Harris had not yet officially requested a move to the Demons, but it appeared a fait accompli.

A return to the Blues has been ruled out, meaning the Demons will either need to find a suitable trade for Harris by next Wednesday’s trade deadline, let her go as a restricted free agent, or allow her to walk to the draft later in the year.

Melbourne have been tight-lipped around their interest in Harris as they work to orchestrate a deal with Geelong to procure young gun Olivia Purcell.

Sources indicated a trade is the most likely outcome, although Harris’ worth in a trade could be difficult to ascertain, given the complexities of the boxer’s situation, including how much she commands in salary.

Her manager Alex Saundry confirmed to The Age that the situation looked promising around Harris finding a new club. She has previously gone on record saying that Harris had not requested a pay packet of $150,000, a figure which had been reported in recent weeks.

Melbourne AFLW skipper Daisy Pearce told SEN radio on Thursday that she would be keen to play alongside Harris.

“I’d be pretty excited at the thought of playing alongside her because of the player she is and the phase of her life that she’s coming into,” Pearce said. 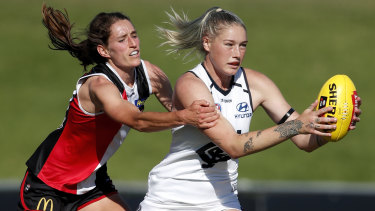 “I catch up with Tayla every now and then and jumped on the phone in the last couple of weeks as she’s gone through this, and then again when Melbourne got mentioned.

“The price tag that gets thrown around is a bit muddied, given the intricacies of AFLW. Part of that would be her playing salary, but that’s very limited in the tiered structure of how you can pay AFLW players.”

Meanwhile, there is industry intrigue surrounding the future of St Kilda AFLW coach Peta Searle. The pioneering coach, who initially joined the Saints as part of their men’s coaching team in 2014, is not yet contracted at St Kilda for next season. Multiple women’s football sources are of the view that she has spoken to Geelong about their senior coaching vacancy following the departure last month of Paul Hood.

The Cats would not confirm if Searle had applied for the role, while Searle has not responded to calls.

Already in trade period, Richmond sent Sabrina Frederick to Collingwood in a deal that made Maddie Shevlin a Tiger, while Richmond have also gained Poppy Kelly from the Saints.

Jess Dal Pos is poised to join the Blues from Greater Western Sydney, while Katie Loynes, let go by Carlton, will head to the Giants.

Jasmine Grierson of North has been weighing up her future amid interest from the Giants, while Kim Rennie of the Dogs has asked to join the Kangaroos.

Daria Bannister will remain at North despite interest from the Cats, who should gain Chloe Scheer from Adelaide.

Tags: Dees, Harris, likely, request, to
You may also like
Latest Posts