Anthony Griffin never doubted his ability to land another job as an NRL head coach after his messy and sudden divorce from Penrith.

Exactly 1103 days since being sensationally sacked by Penrith, despite the club being well-placed for a top-four berth at the time, Griffin will coach against his former club for the first time on Friday night. 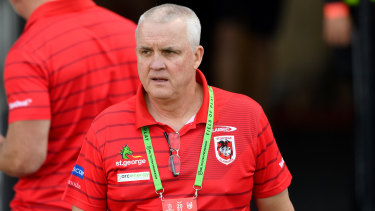 Anthony Griffin will coach against Penrith for the first time since being axed by the club in 2018 on Friday night.Credit:NRL Photos

If the timing of Griffin being dumped by Penrith just a month out from the 2018 finals came as a shock, the coach’s comments in the days that followed were even more explosive.

Griffin made it known he was unimpressed with the story being told at the time that he had lost the dressing room, and with Penrith’s then general manager of football Phil Gould claiming he was too “old school”.

Sources at Penrith said assistant coach Cameron Ciraldo came close to quitting while working under Griffin. There were some also upset Griffin had taken credit for bringing through juniors who had already been in the club’s system for several years. 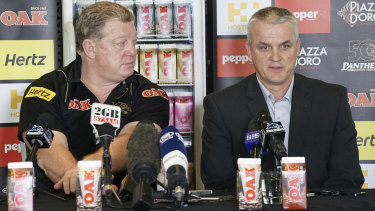 Phil Gould and Anthony Griffin fell out spectacularly before the coach’s departure from Penrith.

Griffin was paid out for the final two years of his deal by Penrith, more than a $1 million, but the fallout left questions about whether he would land another head-coaching job.

“It was a long time ago. You’re challenging me to come up with my memory there. I haven’t really thought about it,” Griffin said of Penrith. “I made a contribution while I was there, I helped the club, footy things like that happen.

“Coaching is a brutal business. There are only so many jobs to go around, and sometimes you have to be patient.

“As I said at the time, when you’re coaching it’s a brutal business, but the most important thing is you believe in yourself and continue to chase what you want to do.

“I was always confident that as long as I wanted to keep coaching – and that was the most important thing – that there would be a time I’d get another opportunity.

“I’m better for the resilience of the whole situation. Whether you’re a coach or a parent or a carpenter or school teacher, there will be times in your life things don’t go the way you want them to, but when you look back with a little bit of a clearer head down the track, you normally figure out those periods make you more resilient, a better person, coach and leader. That’s the way I approach things.”

One player Griffin knows plenty about is Nathan Cleary, the halfback he gave a debut to against Melbourne as an 18-year-old.

Cleary is expected to return from a shoulder injury he suffered in Origin II, and Griffin said the Dragons had prepared all week as if he would be playing.

“He’s been in magnificent form, and he’ll be busting to play,” Griffin said.

“We expect him to play and to jump straight in to where he left off around Origin time when he was in great form.”

Griffin said one of the great privileges of coaching was giving players their debuts. He oversaw the start of the careers of Cleary, Jarome Luai, Dylan Edwards, James Fisher-Harris, Viliame Kikau and Moses Leota.

Griffin is in his first year at the Dragons who need a victory over Penrith to keep their slim finals hopes alive.

Tags: ‘Haven’t, about, really, Thought:
You may also like
Latest Posts