Hawthorn are mourning the death of 1991 Norm Smith Medal winner Paul Dear at the age of 55.

Dear had battled pancreatic cancer since being diagnosed two years ago and died overnight. 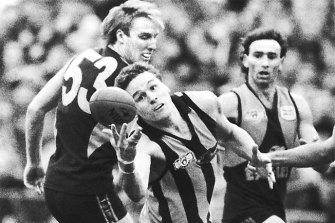 Hawthorn’s Paul Dear balances the ball on his fingertips in the 1991 grand final.Credit:Wayne Ludbey

He was married to Cherie and the father to four children Harry, Nate, Maya and Calsher.

Dear played 123 games for the Hawks between 1987-1996 with the high point of his career being his dominant performance against West Coast in the 1991 grand final played at Waverley Park.

Dear had 26 disposals and kicked two goals to win the Norm Smith Medal, playing in the flag alongside Hawthorn legends such as Michael Tuck, Gary Ayres, Dermott Brereton and Jason Dunstall.

Recruited from Churchill in the LaTrobe Valley, he made his debut for the Hawks in 1987 alongside his older brother, Hawthorn ruckman Greg Dear, and played in the losing grand final that season.

However, he was not in the back-to-back premiership teams as he battled to establish himself until 1990 when he became a key part of the Hawks’ next wave combining height, agility and a booming left foot to play wherever the team needed him.

He worked for sports technology company Catapult Sports and coached at local level after his playing career ended.

He told The Front Bar last year that he was told the illness was incurable when he was diagnosed with stage four pancreatic cancer, and paid tribute to the support he had received from his wife Cherie and Pancare, an organisation dedicated to building awareness around the illness.

“After the initial shock, you take a breath and you sit down and you go, ‘Well, what is next?’” Dear said.