Brad Fittler said it was “a tad ridiculous” NSW were reduced to 12 men after Matt Burton was punched and placed in a headlock after half-time.

The Blues coach was complimentary of Queensland, said they were the better team and praised the five-star performances of Ben Hunt and Kalyn Ponga.

But the decision to punish both sides for a fight that was sparked by Dane Gagai – and featured Tino Fa’asuamaleaui placing Burton into a headlock – just after half-time did not sit well with Fittler.

“At the end of the day he didn’t initiate it ‘Burto’, he’s not going to fight anyone,” Fittler said.

“We got the penalty, but he got belted, he got [placed] into a headlock, and we walk out with one player down each. It’s a tad ridiculous.”

When the line of questioning continued at the post-match press conference, Fittler was mindful to not let the rare Origin fight hijack the evening. 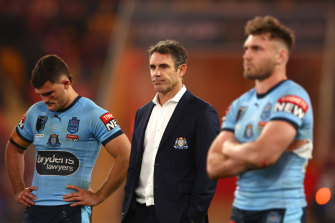 Gagai and Burton, who retaliated with his own flurry of haymakers, were both given 10 minutes in the bin. Fa’asuamaleaui remained on the field and was not sanctioned for his role.

He was also lucky to escape being sent to the bin for a high shot on Burton in the first half.

Fittler said the Blues hurt themselves with some poor errors, including a Daniel Tupou fumble from a Daly Cherry-Evans kick, which allowed Kurt Capewell to score off a Harry Grant grubber to get the home side to within two points. 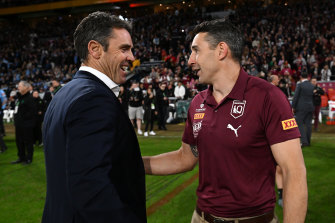 “Blokes have worked so hard for so long with their club footy, they’ve trained hard and given things up and [made] sacrifices, and you lose. It hurts.

Skipper James Tedesco, who was outstanding in a losing side, said the Blues “killed ourselves” with poor errors. NSW completed at worse than 70 per cent in the second half.

Fittler has won three of his five series in charge, and the 10-point losing margin was the biggest he has been involved with.

There will be debate about whether Fittler got things right excluding Jack Wighton in favour of Stephen Crichton, who both came up with crucial errors late in the game.

The coach preferred to lay the blame on “basic errors”, not to mention Hunt’s 40/20 on the hour mark, which was a huge play.

Tedesco denied the Blues’ being short-priced favourites, especially after the COVID scratching of Maroons star Cameron Munster, was an excuse for buckling under the pressure.