Don’t miss a pick: follow our live blog for the first round of the AFL draft from 6.30pm Wednesday, with news and analysis of top players and club strategies.

That Casey Voss, the son of Carlton coach and Lions legend, Michael, has even nominated for this year’s draft tells you something about how steady his football improvement has been in the past four years.

The 21-year-old has only thrown his hat in the pool once before he guesses, keeping his eye on the draft straight after he left school having achieved good enough marks at St Peter’s College to head into sports and mechanical engineering at Adelaide University. 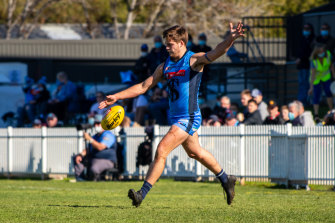 Now, with an honours degree specialising in bio-mechanical engineering, the unassuming Voss heads into this year’s national and rookie draft with his football improvement obvious to everyone at his SANFL club Sturt and beyond.

“I saw him play in the under-18s at Sturt, then was away for a couple of years before seeing him play this year. He’s definitely improved and worked on his game,” Mattner said.

But he does admit he has been a slow developer who really focused on getting the best out of himself this season, mainly to satisfy his curiosity about what standard he could reach. 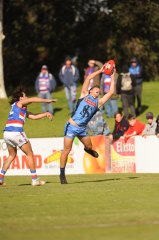 “I definitely developed a bit late,” Voss said. “My confidence has grown, which has allowed me to play some better footy.”

That confidence grew after he set himself up with a strong pre-season that allowed him to get to more contests across half-back, which led to more possessions allowing him to use his skills, which are his strength.

He is by no means a line breaker, more the good decision maker and kick who can set up play from behind the ball, with his ability to read the play probably gained from his junior tennis career, which saw him represent Queensland at one point.

“He is the type of player at whatever level he plays at, he finds a way to impact the game,” Mattner said.

“He is a footy nut, always chatting about footy [and] watching games. Growing up I guess he has watched a lot of footy in his life.”

That football pedigree, which sounds similar to the one Collingwood defender John Noble experienced before getting his chance at the Magpies, has grounded Voss more than most as he remains realistic about his chances of landing on a list via the national or rookie draft.

“I would love to play AFL. It has been a dream of mine for a while, but I don’t have any large expectations for this week,” Voss said. “I just finished my uni degree and that side of my life is progressing well.”

Such a balanced outlook is handy at this time of year for players in Voss’s position. Mostly he is looking forward to the prospect his dad might make a dash back to South Australia, with border restrictions easing, to see his family, having overseen his first official day of training as Blues coach on Monday after being appointed two months ago.

Mattner has his fingers crossed a chance might open up somewhere for Voss despite the fight for list spots being as fierce as ever.

“If he gets the opportunity he will take it with both hands, and he won’t die wondering,” Mattner said.