St Kilda were left in tears after a heartbreaking final two minutes saw Fremantle take the win and remain undefeated.

Saints midfielder Molly McDonald gave her side a seven-point lead early in the last term with a left-foot snap goal, but with the Dockers on the edge of their 50-metre arch with two minutes left it was McDonald who conceded a 50-metre penalty that gave Irish import Kate Flood a shot for goal from the square. 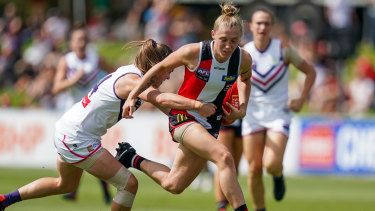 Reeled in: Leah Mascall’s gets to grips with St Kilda’s Darcy Guttridge at RSEA Park in Moorabbin.Credit:AAP

Flood converted and with 50 seconds left Dockers star Gemma Houghton kicked a behind, her third of the game, which proved the difference as the Dockers narrowly edged the Saints in front of a boisterous crowd at RSEA Park, Moorabbin.

McDonald was distraught after proving to be one of her side's best players on the day. In a controversial incident, she attempted to mark a ball that was going out of bounds on the full and instead of throwing the ball to the Dockers player she left it on the ground, which was deemed worthy of a 50-metre penalty. 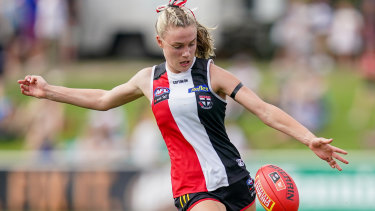 Mac attack: Molly McDonald in action for the Saints.Credit:AAP

"Molly is hurting. She's pretty upset, but how about the goal she kicked? I said ‘mate, you kept us in the game’ and she did with that goal," Searle said.

The Saints coach said umpires needed to consider the spirit of the game after similar incidents this round were not penalised.

"When we want to give free kicks to the letter of the law, or when we want to say it's gray, or say it's the spirit of the game – I don’t think it should be decided by an umpire's decision," Searle said.

"If she threw it away or she was waiting to give it back [you pay it], but there was no maliciousness in that." 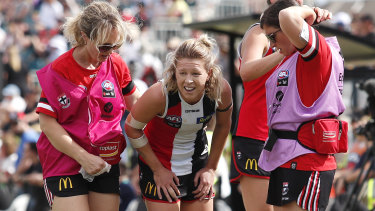 Hobbling off: Kate McCarthy of the Saints leaves the field after suffering an injury.Credit:Getty Images

Dockers coach Trent Cooper praised his side’s persistence in a frustrating match in which they missed chances to seal the game.

But he did feel it was a fair 50-metre penalty.

"I was yelling out '50' from the box, not that anyone could hear it," Cooper said.

"You feel sorry for her. It would have been nice if we kicked a couple more goals so we didn't win by that point."

The Saints used their ball pressure and resilience to stay in the game despite the Dockers moving the ball better and having players like Houghton who could push the ball quickly inside their forward 50.

The game couldn't have started worse for the Saints with draft pick Tarni White crumbling to the ground with a suspected anterior cruciate ligament injury in the opening minutes, they later lost feisty ball-winner Kate McCarthy to a suspected knee injury although Searle said it didn't appear to be an ACL.

The Dockers now have their eyes on locking down top spot in their conference while the Saints continue to look capable of more wins.

Dockers star Gemma Houghton again showed her elite run and carry skills and had three chances to kick late goals, but put two of them into the post and missed one. When her accuracy improves she will be a menace.

After beating Melbourne at Moorabbin earlier this season, the Saints almost pulled another shock with their ball pressure forcing the Dockers into multiple errors. Searle said her side wasn’t content and wanted more wins. She pointed out they were in their first season, compared to Fremantle now in their fourth.

Tags: as, for, Freo, Heartbreak, Saints
You may also like
Latest Posts