The first three words Collingwood skipper Scott Pendlebury could find in the rooms less than an hour after the siren sounded with the Magpies one point behind Sydney summed up the emotions floating through black-and-white veins. 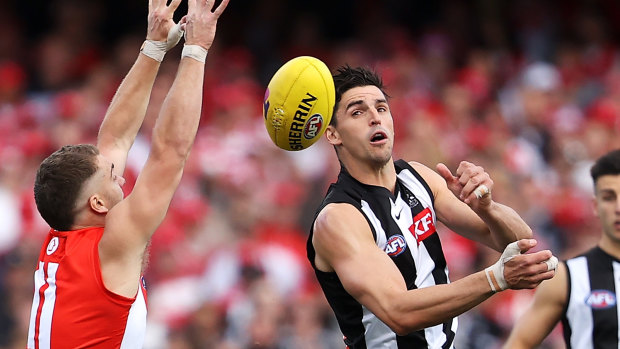 The champion Magpie had finished the game with 29 touches, including nine in an epic, tense last quarter, having been Collingwood’s best player from start to finish as they attempted to reach their second grand final in five seasons.

“It was an incredible game to be a part of and we were just on the wrong side,” Pendlebury said.

“I am really proud of what we dished up … even though it did not go our way I felt like we went down swinging.”

The Magpies charged back from 36 points down to lose by the smallest of margins, having lost the 2019 preliminary final by four points and the 2018 grand final by five points.

This time they found themselves fighting for a spot in the grand final after finishing 17th in 2021 and appointing rookie senior coach Craig McRae. They played a style of football that excited fans with their swift ball movement and capacity to keep coming when the game looked lost.

“I feel like this group is capable of something pretty special in the not too distant future. It hurts now and we will rally around each other but our will to keep going and keep attacking was phenomenal,” Pendlebury said. “We almost pinched it.”

Playing in his 28th final, Pendlebury has now played in a draw and been on the winning team in just one win in his five finals decided by a goal or less. However, he saw past his disappointment to predict a bright future under McRae.

“This group has taken so many steps forward. The worst thing you can do in footy – and it hurts so much – is to not even be a part of games like this,” Pendlebury said.

“Our boys will be so much better for the experience. Of course, you would love to win a prelim and go through to a grand final but not to be.”

Eventually, in thongs and shorts, looking like he had woken up and strolled up the street to grab coffee, he summed up what those surrounding him were feeling.: “The Collingwood army leaves Sydney heartbroken but really proud.”