EXCLUSIVE: London Irish star Henry Arundell discusses his rapid rise to the top after stellar season – as questions rise of whether 19-year-old speed king is the X Factor answer to England and Eddie Jones’ woes

There is a pensive look on Henry Arundell’s face. A hint of nerves as he takes a seat in the empty bar at London Irish’s training ground. ‘I’ve never really done a proper interview before,’ he says, ruffling his floppy hair as his fast-track rise into the spotlight continues.

He takes a curious look at the cameraman setting up for a photoshoot, before quickly settling into conversation about rugby’s breakthrough story of the year. We start at the beginning, in 2002, when he was born at the Eastern Sovereign military base in Cyprus.

‘My mum was a nurse in the military and my dad was a colonel in the Rifles,’ says the 19-year-old. ‘I was born in Dhekelia, the old RAF base which is now shut down, and I lived there for two years. My dad did tours of Northern Ireland, Iraq, Afghanistan. I lived in Cyprus for two years and then we moved around a bit more because of my dad’s postings: Scotland, Northern Ireland, England, America. It was cool, moving around a lot, experiencing different places.’ 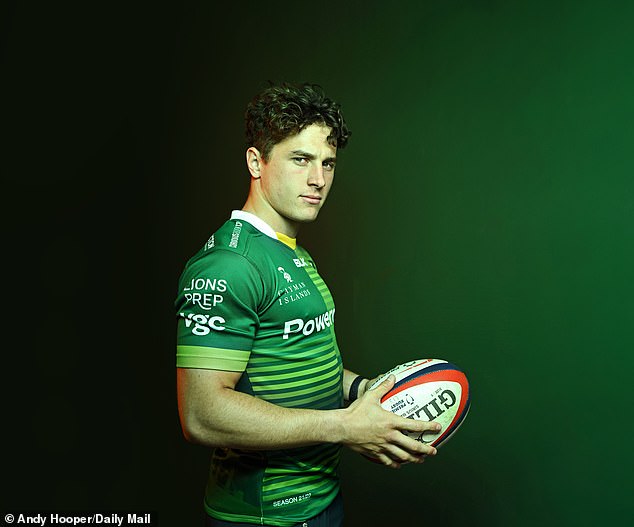 Naturally, the military life rubbed off. Arundell was a disciplined academic, achieving straight As in his A-levels last year, and he cultivated an interest in modern war. Twelve months ago, he almost moved back to America to study history on a prestigious scholarship at Yale University.

Arundell says: ‘At school, we studied Northern Ireland and the Anglo-Irish war. My dad was in the thick of that. It has always been interesting to talk to him about why things happen around the world.

‘I don’t want to be a historian or work in a museum but I’ve always had an interest. You don’t want to get too focused on just rugby and looking at BBC Sport all the time. You can’t spend all your time on the internet watching highlight reels. Sometimes you need to branch out to BBC News! 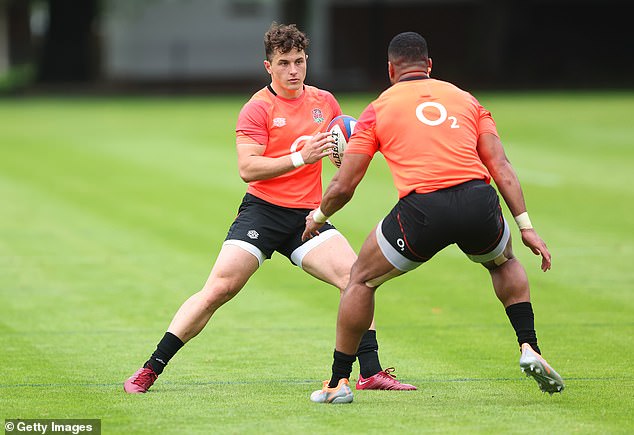 ‘I’m mostly interested in modern history and the political side of it; 20th-century war, Cold War. Why conflicts are beginning and the geo-political aspect of it. If I hadn’t had this opportunity with London Irish, I’d had some discussions about opportunities at Yale. There was a rugby scholarship there. Rugby’s growing in America so they wanted players to go over and I’d have done a major in history.’

America’s loss has been England’s gain. Arundell’s name has not even made it onto Wikipedia yet, yet he is in line to be the country’s headline debutant against the Barbarians at Twickenham next week. He has stunned the sport with his spectacular individual tries, earning comparisons with All Blacks legend Christian Cullen for his effortless running style.

‘That fun, running rugby is the exciting part for me,’ says Arundell. ‘Everyone likes X-factor. People mention Christian Cullen and Jason Robinson. They are the best running full-backs of all time. Players who made people hold their breath and think, “What are they doing to do next?” You see it in the NFL. I like watching the running backs and wide receivers. You watch their highlights on YouTube and they were absolute freaks. 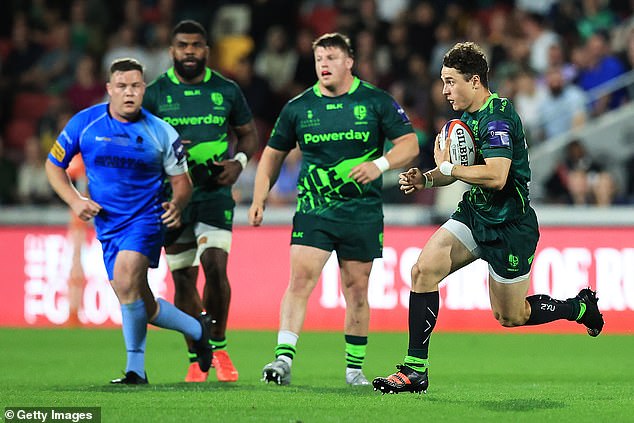 ‘I always wanted to get the ball, see what I can do, who I could step. I’d watch the best sidesteps in rugby — like Quade Cooper — and try to replicate them. I’ve always enjoyed footwork and speed.

‘When my family settled in Bath, we had season tickets at the Rec. I was at Beechen Cliff School and I was all set on playing for Bath. I watched guys like George Ford, Jonathan Joseph, Anthony Watson. Outside of Bath, it was Mike Brown, Israel Dagg and William Ryder. I’d always be watching their highlight reels.’

Dreams of playing for Bath were quickly shelved. When Arundell’s father retired from the army, he took a job as director of operations at Harrow School. The school granted Arundell a scholarship, meaning he fell into the catchment area of London Irish. 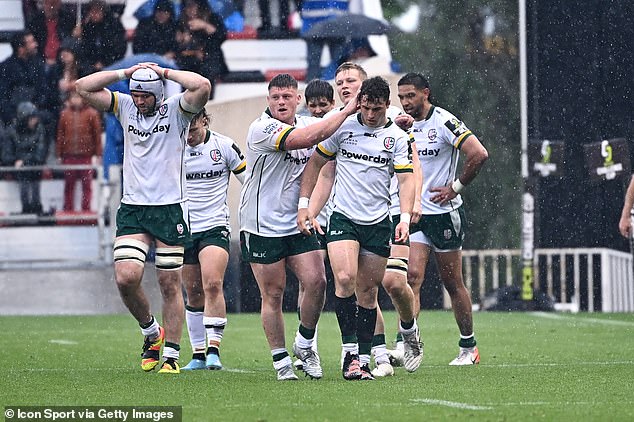 He became a keen track and field athlete — running 100metres in just off 11 seconds aged just 16 — and is now competing with Adam Radwan to be the fastest player in English rugby.

‘I did track and field in the summer at school. Cricket was too slow for me. I tried it but I couldn’t fake it. I did 100m, 200m, long jump, shot putt. You’d look at guys like Usain Bolt and Michael Johnson to work on technique.

I wouldn’t say my technique is incredible now but you build muscle memory from the athletics stuff. There’s not much point in rugby players running 100m now because rarely do you do that in a game. More recently I’ve been hitting 10.5m per second.’

How I scored that try that broke the internet

I HAVE watched it back quite a lot now! Phippsy [scrum-half Nick Phipps] was running back to get the ball and I was calling for it because he was under a lot of pressure from [Gabin] Villiere.

When I got the ball, I looked up and there were only a couple of players in front of me. I was thinking, ‘Where is everyone?’ There was a big gap outside a forward and I was thinking that I could easily get around him. I put my head down, saw a gap and then I thought I’m just going to keep going and try and avoid the guys on my right and my left.

As I got to towards halfway, I saw the No9 and No15 and thought I couldn’t step in because there would be cover on the inside. I basically tried to outpace the No9 and put the 15 off-balance.

I kept my eyes forward to try and sell that I would keep going straight, keeping the No9 in my peripheral, and then just cutting to the outside last minute.

At this point I was thinking, ‘Ok I’ve run quite far here!’ but I was feeling fresh because I’d come off the bench. There’s so much adrenaline going through because there’s the crowd and your teammates are going mental. It came down to a foot race.

The 15 had the same collision course as me so he would have hit me into touch if I’d kept going. I had to put him off his feet with a bit of hesitation to check him a bit. At the time it’s just instinctive. After that I knew I wasn’t going to get caught, so I kept going, dived early because it was a wet day so I knew I’d slide quite far.

Blessed with a natural X-factor, Arundell signed his first contract at London Irish at the start of his final year at school. He deferred an offer to study history at UCL and has not looked back. On Friday he signed a long-term contract extension with the club, rounding off a whirlwind week in which he was named the league’s breakthrough player of the season.

‘I didn’t expect anything on the levels of what’s happened this season. Twelve months ago I was in bed recovering from hamstring surgery. My main goal was to make the England Under 20s and maybe play a few games for Irish. The social media stuff blew up a bit after our Under 20s game against Scotland and I was thinking, “Wow, this really just happened”.

‘It was pretty cool. I got a phone call on the plane back from Scotland from our academy manager, saying the first team wanted me for the game next weekend so they were going to pull me out of camp. That’s when it felt like things could ramp up.

‘There were a lot of learnings. I had games I didn’t want to have. The coaches gave me the praise I needed but they let me know there was lots to work on. I’m only speaking from my first season but as soon as you start settling on, “Oh great, I scored a try”, then things can go wrong. Any arrogance gets found out quickly, especially in a rugby culture.

‘I’ve been with Irish since I was 15 and signing a new contract was a very easy decision. Other clubs were messaging my agent but there was rarely a point I considered moving.

‘Irish play rugby that suits me; it’s not get the ball and kick. We want to attack from everywhere. The fun running rugby is exactly what I want to play.’

Having received a call from Gregor Townsend, Arundell could have sought a move up to Scotland. His mother’s mother — maiden name McLennan — was born north of the border, while his father was born in Wales. Both nations came seeking his services, but Arundell has opted to team up with Eddie Jones and England this summer.

‘I was nervous going into camp but Eddie just told me to enjoy it. I’m only 19 so there’s no pressure to force anything or get straight into a team. I’ve just got to keep learning because I’m so far off where I want to be as a player. It’s a bit surreal to talk to the older guys that you’ve watched on TV, like Anthony Watson, and I’ll see how it plays out.’ 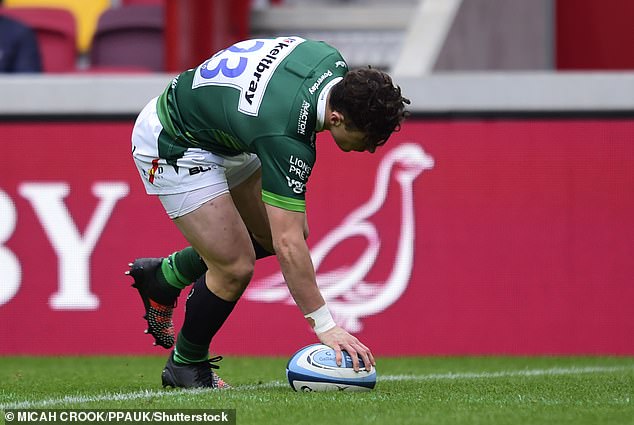 If his rise continues at the same speed, Arundell may well be a part of England’s World Cup campaign in 2023. Time will tell.

‘I’ve got a notebook from when I was 10 and I take it to every game. It’s a bit dog-eared because I’ve had it for years. I wrote down every stage I want to get to: play at the Harrow Festival at under 15, play at the Wellington Festival at under 16, play age-grade England, play at the 2027 World Cup and go on a Lions tour. It’s not that I’ll be gutted if I don’t do that, but it reminds me of why I started.’

As he continues to tick off his childhood dreams, one by one, he may find that some come around sooner than expected.