Jackson Hastings didn’t just own the big moments during the biggest boilover of the season – he was involved in just about all the other ones as well.

If it is the job of a halfback to stamp their imprint on a contest, Hastings performed it as well as anyone in recent memory during Wests Tigers’ breakthrough win against Parramatta. Wearing the Tigers’ No.7 jersey for the first time, he touched the ball a staggering 90 times at CommBank Stadium on Monday. That is 11 times more than any other playmaker in a game this year, eclipsing the mark set by Dragons skipper Ben Hunt in round five.

To put his involvement into further context, the NRL average for halfbacks in the opening six rounds is 51.5, with Hastings notching the eighth-most touches in a game since 2014 (Jeff Robson holds the record during that period with 98 for Parramatta in 2016).

There was quality to go with the quantity. While most will remember his performance for his last touch – the winning field goal as the game clock expired – the former Roosters and Sea Eagles playmaker also freed up maligned halves partner Luke Brooks to submit his best game of the season.

While some of his touches came from dummy-half after Jake Simpkins came off with injury, Brooks’ involvement was also high. He was credited with 60 receipts, up from his 2022 average of 51.2, and included two try assists.

What’s more, Brooks appeared unburdened after shedding the No.7 jersey and all the scrutiny that comes with it. 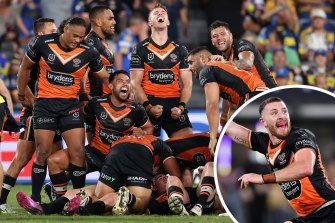 “I just wanted [Brooks] to loosen the shackles,” Maguire told the Herald. “We’ve definitely got a good combo there. I wanted those two to have the ball in their hands because they are the most skilled. When the ball is in the spine’s hands, they are the ones threatening the line each time building pressure on the defensive decisions.

“That’s one of the biggest reasons to get the ball in their hands.”

The Tigers’ two best performances of the year have come when Brooks and Hastings have been together. The joint-venture outfit gave the Storm a scare in the opening round, but weren’t able to build on that momentum after Hastings was suspended a week later for three matches for a dangerous throw.

The return of Adam Douiehi from an ACL injury could give Maguire welcome selection headaches rather than the ones he has been experiencing. However, by the time Doueihi is available – most likely in round 13 or 14 – Brooks and Hastings may have established themselves.

“Jacko and Brooksy will get better each time they play, no doubt at all,” Maguire said. “We can see how that went yesterday, and they have only played two games together. That will continually evolve, they are going to chime in together, they’ll kick to each other and do all sorts of things. That’s what a spine does.

“Obviously Jacko took a bit more control there yesterday just to allow Brooksy to play a little bit wider of the ruck.

“You could see how he threw a nice long ball and then David Nofoaluma scores a try. Simple little things like that have been there but unfortunately for the past three weeks Jacko has been on the sidelines.”

The recent rule changes have created a faster and more expansive game. The Sharks under new coach Craig Fitzgibbon have employed a move dubbed “The Slingshot”, in which the outside backs fan out towards the corner post after forming an initial tight formation. The Tigers hope they now have the personnel to pose threats of their own on the flanks if the middle battle is won.

“I feel like I’m in control when I’m getting lots of touches and talking.”

“You’ve got to evolve with the game and there’s a lot more ball movement in the game,” Maguire explained.

“You look at Cronulla at the moment, there’s a lot of ball movement, they’re moving their middles around. When the spine has got their hands on the ball, that’s the key as well, being able to put the ball through the guys who can catch-pass and then use your larger guys to dint the line or be a decoy, those sorts of things.”

Against the Eels, the Tigers attempted to play fast while slowing down the opposition. It meant they conceded more penalties and six-agains, but their play-the-ball speed was faster.

With the forwards holding their own – Alex Twal was a standout with 166 metres and 46 tackles without a miss in a 63-minute stint – the halves benefited. Much of what Hastings – who was identified as a priority signing by the club’s former list and recruitment analyst Scott Woodward – touched turned to gold.

“I feel like I’m in control when I’m getting lots of touches and talking,” Hastings told SEN. “I’ve always played the position where I like talking and steering us around the park and shouldering that responsibility. With your touches, you’ve got to make them good ones too.

“[Ninety] is a lot of touches but I felt I did a pretty good job of making the most of them.”

Brooks earned Dally M halfback of the year honours in 2018 but may have found a new home in the No.6 jersey. “In our game, of course there is a little bit more emphasis on the No.7,” Maguire said. “If it’s going to help psychologically having the No.6 on Brooksy’s back, as it did yesterday, that’s great.

“Brooksy at is best is what you saw there yesterday; he’s hitting short balls, he’s playing wide and it gives him a bit more time to get those plays on. If that’s going to help, that’s good for the team.”

The Tigers have belatedly got their campaign off to a start with the snaring of a big scalp, but they have struggled to produce strong performances back to back. They will get the chance to show the Eels win wasn’t a one-off when they take on South Sydney on Saturday.

“We know we need to turn up this week and do it all again because we’re playing against another team rolling around the top of the ladder,” Maguire said.