Veteran coach Ross Lyon says Carlton star Patrick Cripps needs to change the way he plays to keep up with the modern game.

The word of advice comes as Carlton confirmed Cripps has been playing with soreness and the club also dealt two savage injury blows with important playmakers Jack Martin and Zac Fisher set to miss the next six weeks. 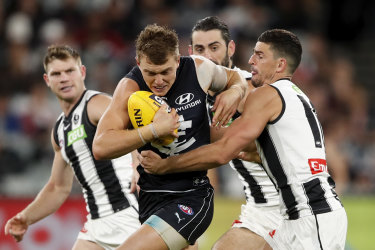 Cripps is tackled against Collingwood.Credit:Getty

The Blues co-captain has made a slow start to the season compared to his usual standards.

Lyon says while it’s still early in the season, Cripps may have to change his ways to return to the elite midfield group in the game.

“I just watch him, he played OK in round one, but with stoppages down 30 per cent and he’s spending less time in (the middle), his greatest strength has been watered down, to a degree,” Lyon told The Age.

“Opportunity through less of them (stoppages) and also because he’s spending more time forward, so his game is going to look different.

“He’s going to have to adapt and change his game a little bit. The game is changed, so he’s got to keep moving with it.

“Is he good enough to adapt? That’s probably the question that will be asked and answered.

“I think it’s a watch this space.”

Lyon’s comments came as Carlton moved to clarify the situation surrounding Cripps’ fitness, with reports surfacing on Monday that he was receiving weekly injections and was playing hurt.

Carlton say they are confident Cripps will return to full fitness in time for Sunday’s crucial match against Fremantle.

“Patrick’s had some soreness in the first couple of rounds. It’s not uncommon for players to play with soreness,” high performance boss Andrew Russell said.

“He’s been able to train more this week than he has in the past couple of weeks.

“We’re very confident that after the 10-day break, we’re going to see a really good Patrick Cripps on Sunday versus Fremantle.”

But the Blues will be without important duo Fisher and Martin for the next six weeks due to leg injuries.

Fisher struggled late in the loss to Collingwood and has bone stress, while the club said Martin injured a PCL in the final seconds of the game. 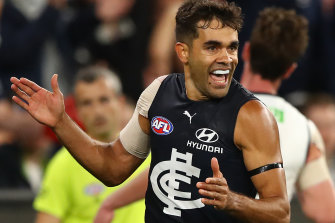 “Jack Martin was your classic PCL mechanism of knee-on-knee. Initially, he wasn’t too bad coming out of the game but he’s had some swelling,” Russell said.

“That’s going to require him to be on the sidelines for somewhere around six weeks.

“Fisher’s is the opposite to his syndesmosis ankle last year … he’s got some bone stress. We think he’s … going to miss around six weeks of footy and then we’ll see him back out there.”

Eddie Betts and Mitch McGovern will be putting their hands up for selection this week.

Both forwards were involved in last week’s captain’s run on Wednesday but weren’t selected to play. Collingwood and Carlton’s VFL teams didn’t have a game.

Jack Silvagni could also come back into the team after missing one game with a shoulder injury and recovering sooner than expected.

Tags: bee, greatest, has, his, Strength
You may also like
Latest Posts