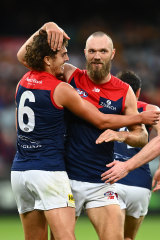 No one was doubting Luke Jackson was talented. The junior Australian basketball representative had turned heads in recruiting circles. The West Australian was quietly spoken but athletic, keen to learn and was a hunter in the contest. He was competitive and better attuned than most draftees to the demands of a professional athlete’s lifestyle because of his hoops achievements.

If the Demons didn’t pounce at pick No. 3, Greater Western Sydney would have taken Jackson at pick No. 4 without blinking.

But the third pick was so early for a ruckman. It was eight years since Billy Longer had been the last specialist ruckman taken in the top 10. And the Dees already had Max Gawn. Even those in Jackson’s camp were surprised Melbourne were so hot on the kid from Willetton with the 1990s Argentinian soccer player haircut.

Jason Taylor didn’t waver though. Melbourne’s national recruiting chief knew what he had at his disposal. Jackson wasn’t a ruckman. OK, he was, but he was so much more. He could be a key forward, but more to the point he could be a bona-fide midfielder. He was one out of the box. He was a unicorn.

Twenty-one months on from 2019, Jackson is a mainstay of the Dees’ side, playing alongside Gawn. On Thursday he will likely be named winner of the Rising Star award. Then on Saturday night Jackson will play his first AFL final against the Brisbane Lions.

There is a reasonable chance that before September is out, Jackson will be playing in a grand final, in his home city, before his 20th birthday.

Oh, and standing alongside him on Saturday night will be fellow 2019 draftees Kozzy Pickett and Trent Rivers. Between the trio, they have missed just one AFL game this year – when Jackson hurt his hand. That in a team that finished atop the ladder. Pickett had been acquired via a trade with North Melbourne, in which the Dees relinquished their 2020 first-rounder.

Gawn has maintained his brilliant standard and is in the frame to earn his fifth All-Australian blazer, days after taking the mark and kicking the goal to seal a famous minor premiership for the team of which he is now captain.

As far as plans go, this one has worked almost perfectly.

There are particular environmental factors which have led to Jackson being the favourite for Thursday’s award, ahead of Giants midfielder Tom Green.

As a result of last year’s COVID-19-shortened AFL season, fewer first-year players passed the 10-game threshold, which would have led to them losing eligibility for this year’s award.

The upshot has been an extraordinary amount of double-up nominees. In the 28 years of the award’s history before this season, there had been just 11 players nominated twice.

This year there have been five second-timers: Jackson, Green, Mitch Georgiades, Lachie Sholl and Justin McInerney.

But this effect has been compounded, too, by the fact that Victorian draftees didn’t play any competitive football last year, meaning fewer players have been ready to become senior regulars in their first season.

Cox and Perkins are roughies to poll but neither has played as consistently well as Jackson.

Perhaps the biggest source of intrigue is what Jackson ends up becoming long-term. His first 27 games are statistically similar to Gawn’s first 27, although Gawn won considerably more hit-outs early and Jackson has averaged 12.1 disposals per game, compared to 9.3 from Gawn.

Jackson has also had the chance to learn from Gawn. “He’s definitely a player I try to model my game on. I’ve looked up to him the last couple of years,” Jackson said on draft night, 2019.

The big difference of course though, is Jackson’s first 27 matches have come inside two seasons. Gawn, having overcome two knee reconstructions, didn’t get there until midway through his sixth season.

Jackson is already a rising star, and has time on his side to burst into another stratosphere.

Tags: and, defi, How, Jackson, Melbourne
You may also like
Latest Posts