Andrew Fifita could have died if not for the quick intervention of paramedics who rushed him to a Brisbane hospital as his airway started closing.

Extraordinary details of the Sharks forward’s ordeal after suffering a fractured larynx have emerged, including Fifita’s fear for his life as his screams reverberated around Redcliffe’s Moreton Daily Stadium on Sunday night.

According to sources with knowledge of the situation, Fifita was kept alive by the assistance of quick-thinking medical officers, who realised his airway was shutting rapidly and he was struggling to breathe, whisking him to Royal Brisbane Hospital for emergency treatment.

The 32-year-old was then placed in an induced coma, which was expected to last for 24 hours. He was in a stable condition on Monday evening. Fifita will have surgery on Tuesday and is expected to be in hospital for at least a week.

On Sunday night, doctors inserted a tube to assist Fifita’s breathing and provided him with medication that allowed the swelling around his airway to reduce.

Earlier, paramedics had treated the Tongan and Australian international for about 45 minutes on the field after ushering him out of the crowded Cronulla dressing room, where he was in a state of distress. 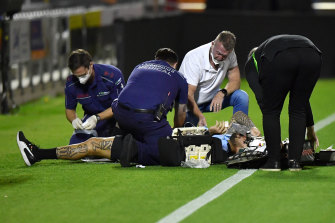 Andrew Fifita being treated on the side of the pitch at Redcliffe Stadium on Sunday night.Credit:AAP

Onlookers could hear the panic in Fifita’s voice even after he was taken back onto the field, with concerned players leaving the sheds to see what was happening.

Stadium officials were forced to close the door to the tunnel to stop people from walking out to check on Fifita’s welfare.

The rapid deterioration in Fifita’s state came as a surprise after the events of the second half, with the prop leaving the field only six minutes after the interval.

Sharks trainers and teammates noticed his voice had changed when he spoke and shouted encouragement from the sideline. But it was only after full-time that the situation become grave, as Fifita realised he was struggling to breathe, prompting panic inside the dressing room that could be heard outside. 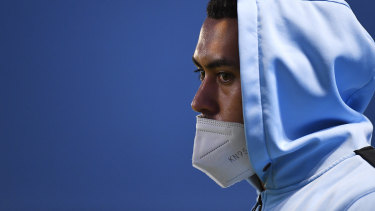 Fifita came off six minutes into the second half but remained on the sideline, shouting encouragement.Credit:Getty

NRL judiciary chairman Geoff Bellew took the unusual step of allowing the match review committee until Tuesday morning to finalise charges from the match as they scoured for further vision of incidents involving Fifita’s 13-minute stint.

Given the venue does not usually host NRL matches, the MRC only had camera angles from the television broadcast available to analyse.

Sources have told the Herald a collision between Fifita and former State of Origin teammate David Klemmer only two minutes into the second half is believed to be the incident in which Fifita damaged his larynx.

Newcastle prop Klemmer slightly raised his arms as he carried the ball into Fifita and could be seen making contact around his throat. From the angles seen so far, it is expected Klemmer won’t be charged over what seemed like an innocuous incident.

Fifita left the field a few minutes later after an attempted tackle on Tyson Frizell, with the Knights scoring on the next play.

The prop walked off as the bunker checked Enari Tuala’s try and Fifita could be seen standing next to the Sharks bench metres from Jake Clifford’s attempted conversion moments later. He was handed a mask to put on while he was an interchange player.

Fifita left the field a minute before half-time for a head injury assessment after a tackle involving Knights utility Kurt Mann, but that did not damage his throat.

The Sharks released a statement on Sunday night saying Fifita had “reported difficulty swallowing” as he suffered from a “significant laryngeal injury”.

“He is receiving the best possible care and all going well, it is expected he will recover in hospital for an extended period,” the Sharks said in a statement on Monday night.

“Andrew’s wife Nikki and the Fifita family have expressed their appreciation to all who have sent messages of support and offered well wishes.”

Newcastle’s senior assistant Rory Kostjasyn suffered a similar injury, which forced his retirement, while Melbourne’s Tom Eisenhuth has made a recovery from a throat problem to be a key member of the title favourites’ squad.

Fifita has one year to run on his lucrative deal with the Sharks, which have a shortage of front-rowers with Aiden Tolman facing a one-game suspension with an early guilty plea over a cannonball tackle on Daniel Saifiti from the same match.

Braden Hamlin-Uele can accept a $750 fine for a high tackle on Connor Watson.

Tags: aver, How, medics, quick-thinking
You may also like
Latest Posts