It’s said there is nothing new in rugby league and this includes the coronavirus which has a parallel, as a pandemic, with the deadly Spanish Flu of 100 years ago. 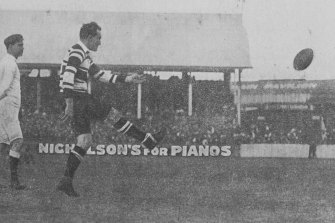 Dally Messenger survived the Spanish flu, but his wife did not.Credit:Alan E Furnell

Back then, a national emergency was declared to combat the highly infectious disease; people were encouraged to minimise contact, with the Christ Church in Queanbeyan restricting worshippers to no more than two per pew; flu masks were worn; theatres were sprayed three times a day with antiseptic and, like now, strict border quarantine controls were enacted to slow the disease’s arrival. It reached epidemic proportions in Australia when it was effectively over in its country of its origin.

Yet, the rugby league competition continued, despite the pandemic affecting the young more than the elderly and claiming two high profile deaths. Furthermore, the NSWRL contributed resources to fight it, rather than ask the government for handouts.

When the Pneumonic Influenza, or Spanish Flu as it was popularly known, reached Australia in late 1918 (first case was in Melbourne), within days it would travel to Sydney and throughout NSW. Between 1918 and 1920, the pandemic killed more people worldwide – between 50 million and 100 million – than died during World War I.

It travelled to Manilla, in northern NSW where Dally Messenger, rugby league’s first superstar, and his wife, Annie, operated the Royal Hotel. They both became critically ill and were hospitalised. Annie died. Only weeks earlier, they had been visited by Annie’s son from her first marriage, Private Cyril Macaulay, who had recently returned from active service in Europe.

On June 18, 1919, the disease claimed the life of Sergeant Mick Frawley who had played in the Roosters first premiership team. A forward, Frawley began his career with Easts in the code’s first season of 1908, represented Australia against New Zealand the following year, played in the 1911 premiership team and retired. He enlisted in 1916, fought on the Western Front and was only 33 when he died in Moore Park Emergency Hospital from Spanish Flu.

NSW was the worst affected state, as appears to be the case with the coronavirus. In Sydney alone, there were eventually 3500 deaths. It was estimated that 36 per cent of the population was infected with a death rate of one in eight, far higher than today. However, unlike the coronavirus which appears to affect the unwell and elderly, Spanish flu attacked the healthiest, usually those between 18 and 40, and mainly men.

This attendance, at a time the SCG was used as a quarantine station for returning soldiers, compares favourably with last Saturday’s crowd of 6235 at ANZ stadium for the Rabbitohs versus Sharks game, played before the ban on gatherings of 500 people or more was enacted.

But, as our current code administrators are well aware, games 100 years ago weren’t on TV.

Nevertheless, the NSWRL had assets of 5520 pounds in March 1919, with liabilities of only 27 pounds, compared to today when the game has no assets. Furthermore, the NSWRL contributed 5200 pounds the previous year to the war effort.

In 1919, the code’s leaders were proactive in supporting the community.

James Joynton Smith, who financed many of the Wallabies to switch to rugby league, had become Sydney’s Lord Mayor by November 1918 when he was appointed to a council formed to fight the Spanish Flu in NSW.

He also raised the money to establish the Royal South Sydney Hospital which was the main treatment centre for victims of Spanish Flu. He does share one comparison with ARLC chair Peter V’landys who is also chief executive of Racing NSW: he wore many hats.

Tags: How, League, Rugby, survived, THE
You may also like
Latest Posts