After three ACL ruptures, another torn Achilles, Olympic heartbreak, code-hops and retirements, Tiana Penitani’s emotions got the better of her.

Presenting debut Parramatta NRLW jerseys to childhood friends and former Australian sevens teammates Brooke Anderson and Brooke Walker was all a bit much.

Almost a decade after first signing as teenagers with Rugby Australia, and six years after posing in green and gold training gear, the trio are in blue and gold, and together again.

“It’s so special,” Parramatta captain Penitani said before Sunday’s NRLW clash with the Dragons. “Our jersey presentation last week was a bit emotional for me, with those two girls especially. To be doing that for two of my closest friends, knowing how much they’ve done for women’s sport individually, it was a special moment.

“We were part of the sevens when that sport was in the same sort of growing stage that NRLW is at now. About six or seven years ago sevens was just rapidly growing with participation rates on the incline each year. It was that breakout period, and NRLW feels like it’s in the same space.

“To be a part of that in two sports, it’s surreal, but very cool.” 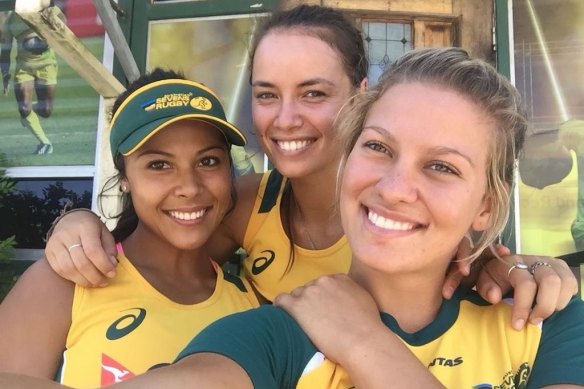 While Walker was a travelling reserve for Australia’s breakthrough gold medal triumph at the Rio Olympics in 2016, Penitani’s second ACL tear by the age of 19 left her watching her teammates from the lounge.

Anderson underwent a knee reconstruction at the same time as Penitani, when they were both still in high school.

Shoulder surgery and a torn Achilles before she turned 20 left Anderson demoralised, and she joined Penitani in walking away from rugby. However, while Penitani couldn’t resist the chance to return to rugby league with the Dragons in 2019, Anderson worked full-time in construction for five years.

“She decided she was going to hang the boots up, and it was myself and her partner who kept hassling her, saying; ‘You’ve got more left in you, you’ve got more to give’,” Penitani said. 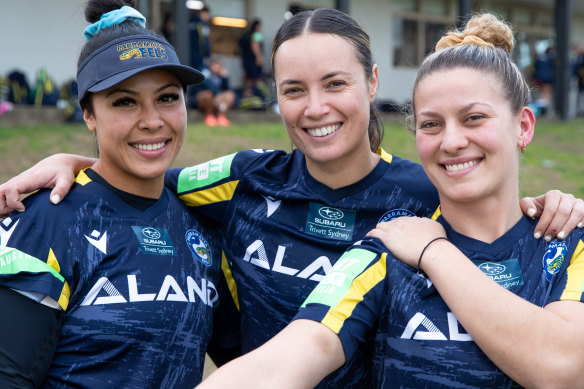 Seven years on, Penitani, Walker and Anderson are together again.Credit:Edwina Pickles

“I could see it in her face when she’d come and watch my games. You could see the spark in her eye. It was an arm wrestle, but we got her in here, and she’s loving it here now.

“She’s not someone that likes to talk about herself, so it was a privilege to share her journey with the girls and share an insight on how hard she’s worked and how special an NRLW jersey is for her considering her history.”

Walker, too, has taken the long road back to league, playing the 13-woman code for the first time since the age of 11 in her native Christchurch. Rugby took hold and then Aussie rules, after she moved to Melbourne in 2018 and linked with Carlton.

But Walker’s spur-of-the-moment decision to turn out for Werribee’s local league side last year quickly had Penitani on the phone. 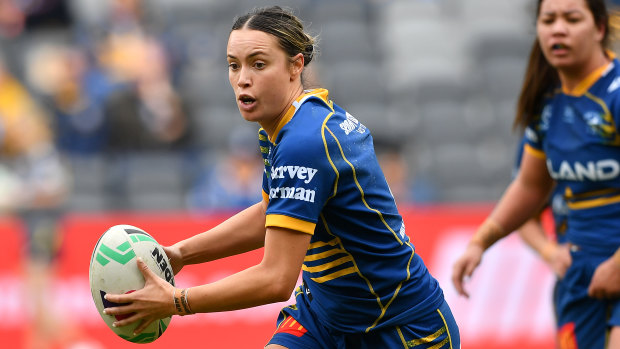 “I was in her ear straight away – ‘Please have a conversation with Parra’,” Penitani said with a laugh. “I know she had success in AFLW, but it was just a no-brainer for me and I knew she’d just fit straight back in.

“It takes time to transition into any code, but she’s always been a really natural ballplayer, especially in sevens. She’s one of those instinctive players who just seems to have time.”

Walker’s progress is on hold for now after her debut in the halves in last week’s loss to the Roosters, with Tayla Preston coming in at five-eighth as Walker drops back to an extended bench.

But her skipper thinks it’s only a matter of time until Walker – who is on contract with Carlton for 2023 – makes her NRLW mark.

“Defensively, the contact’s really different and that takes a bit of adjusting,” Penitani said. “For Brooke, it’s a completely different ball game defending in the halves with split-second decisions, and other teams are going to target you.

“There’s an adjustment there to that different type of contact, but I’m sure she’ll get there. She’s very coachable, and I think she’ll be a big name in our code soon enough.”