It was the middle of 2016, and Jacob Ballard wondered whether he'd made a serious mistake.

Having been delisted by Fremantle at the end of the previous season after a single AFL appearance, Ballard had signed with Richmond's VFL team. Little did he know, he'd walked into a club that was about to endure a year of misery and upheaval that almost tore Punt Road apart. 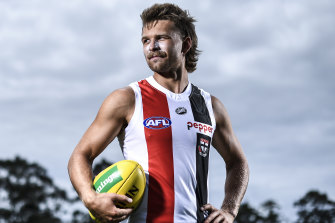 Dan Butler has starred as a Saint this season.Credit:Getty Images

The Tigers' AFL disaster of that year is well-documented, but the reserves, at least at the midway point of the season, were faring little better. Among the strugglers was a small forward from Ballarat whose future on an AFL list was looking very shaky. Dan Butler had missed most of his first season (2015) with a knee injury but his second wasn't going much better, and in the middle of the year he was warned that if things didn't change his career could be short-lived.

"I was actually a bit concerned with the decision I'd made and the level and quality of the AFL-listed guys who were playing," Ballard said this week.

"'Buts' was one of those guys who was right on the fringe and not a very reliable player in my early days. I thought, 'how's he on a list, he's not even very good at VFL level?' And then late in that season he sort of started to find some form."

Port Adelaide premiership coach Mark Williams was working at the Tigers as their senior development coach. 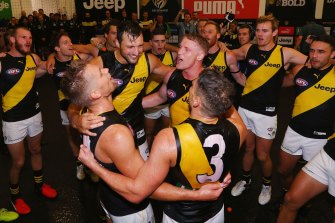 Butler celebrates his first win as a Tiger in 2017.Credit:Getty Images

"I remember speaking to [Butler], probably around round 12. Just kind of reading him the facts of life as to how long people last on lists if they haven't played," Williams said.

"He was just kind of happy to be there but not quite taking the steps to stand out enough and show that it really mattered enough."

Butler had long hair and a bushy beard, a point alluded to by Williams in that mid-year meeting. The next day Butler arrived at the club with a short cut and his facial hair gone. He was a new man.

Butler's footy picked up at the tail end of 2016 as the Tigers won their last six VFL matches to narrowly miss the finals. While Richmond played a whopping 41 players at AFL level in their annus horribilis, Butler wasn't one of them. But he did enough in the state league to earn a one-year contract extension. 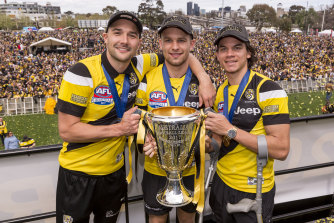 The rest is history. Butler had an enormous pre-season and with the Tigers placing a greater premium on speed in their forward line, the goalsneak was picked for a round one AFL debut. He played 23 games in 2017, kicking 30 goals and becoming an AFL premiership player.

"He came back in ripper shape, leading all the running drills. And he had that breakout year. I couldn't believe it was the same guy, watching him play on TV in the AFL," Ballard said.

Fast forward three years and Butler has completed another incredible transformation. Having fallen out of favour at Richmond last year, he has stunned the football world with an incredible season at St Kilda in which he made the All-Australian squad. On Friday night he will confront his former side in a cutthroat semi-final, and looms as a major danger after cutting the Tigers up with a starring performance in round four.

The question that has been on many lips this year is how did it come to be that Butler was squeezed out of Richmond? Butler's former housemate Jason Castagna was preferred to the now Saint, as was Daniel Rioli. Both have been serviceable players for Richmond, dual premiership players in fact, but neither has played a season anywhere near that which Butler has produced for St Kilda in 2020.

St Kilda list manager James Gallagher pulled off what now looks to be a heist by getting Butler for pick 56 in last year's trade period. 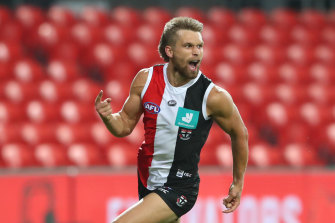 He is philosophical about why Butler wasn't getting a look-in late last year.

"It happens with clubs from time to time. Good players don't get picked because there's other good players in front of them. You can't play seven small forwards a week," Gallagher said.

Ballard says that in hindsight it is somewhat baffling that Butler wasn't prioritised at Richmond.

"I guess someone like a Jase Castagna, who was almost like a bit of a coach's favourite because of his pressure and physicality. Butler's probably the more skillful player but Castagna was always sort of picked above him," Ballard said.

The Tigers' loss was the Saints gain. And Gallagher, gearing up for last year's October spree, which gained St Kilda five ready-made players, could see Butler's untapped talent. What particularly appealed was his speed, an area the Saints were making a priority.

"He's a guy that can get high up the ground and fly really hard back towards goal and burn off an opponent. And he's very, very influential in the forward line. He's busy, he's always involved in the game in the forward line. He's not a small forward that just bobs up and kicks two or three from four touches. He's always involved. We loved that about him," Gallagher said.

"We sat down with him a few times last year. It was so clear that he's a guy that his teammates would absolutely love. He speaks about things more broadly than just himself.

"I can't say we sat there and expected him to perform like this but we were hopeful that everything we've seen from him this year are the reasons that we thought he'd be a good pick for us."

Brendon Lade has been reunited with Butler. Having left Richmond to join Port Adelaide's coaching panel at the end of 2016, Lade came to the Saints ahead of the 2019 season and now works alongside Butler as St Kilda's forwards coach.

"I was in his interview when he was a 17-year-old. The knock on him was he was probably a little lazy and whatever else. Would he ever find out how to work hard? But he'd be one of our hardest workers at the footy club now. Even back then he worked really hard. His [three-kilometre] time trial wasn't terrific and he got that down to under 10 minutes. I suppose that really kickstarted his whole career," Lade said.

"There's always been a little knock on his finishing, but this year he's kicked 28.12.

"The training [at St Kilda] has been different for him. He's probably benefitted from a different program."

Butler revealed on Wednesday that the banter had already started between he and his former teammates. He had a lighthearted dig at Jayden Short, claiming that the Tigers premiership defender didn't actually like to defend. Short and Baker are also former housemates of Butler, and loom as potential head-to-head opponents on Friday night.

Back in round four the Tigers had plenty of chirp for their old mate, but it was to no avail.

"There'll be plenty of lip going his way. He loves a bit of a laugh. But not much fazes him," Lade said.

"He's very good to work with. He keeps things simple, doesn't overcomplicate things and that's how he is in normal life as well."

Williams left the Tigers at the end of 2016 but remains incredibly proud of Butler's progress.

"I still talk to him. I talked to him two days ago," Williams said on Thursday.

"The thing that really touched me more than most was that even though I wasn't at the club anymore, on his 21st birthday he invited me to his party up in Ballarat.

"I continually want him to lift his goals, not to be satisfied with where he's at. To challenge himself … he hasn't finished."