Rugby’s new broadcast deal appears to have come too late for the Waratahs, with NSW confirming dual international Karmichael Hunt and winger Cam Clark won’t be back next season as the franchise comes to grips with a mass exodus.

Rugby Australia’s announcement of a new three-year, $100 million broadcast deal with Nine and Stan on Monday has been lauded in Super Rugby circles, as it gives franchises greater certainty which was topped off by Wednesday’s confirmation of a domestic competition beginning on February 19. 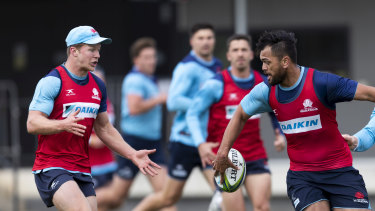 Despite being one of the most senior figures in a youthful Waratahs side, Hunt confirmed to the Herald he won’t be there in 2021. He says he is “keen to play on” if something worthwhile pops up elsewhere.

Rapp conceded that having a broadcast deal sorted earlier might have stemmed the bleeding as the Waratahs, who finished fourth out of five teams in Super Rugby AU, try to pick up the pieces and show faith in a group of youngsters.

"You probably are going to lock in players a lot easier [had a deal been done] because they're certain about their future," Rapp said. "The uncertainty was the biggest thing that has affected people's decision-making. 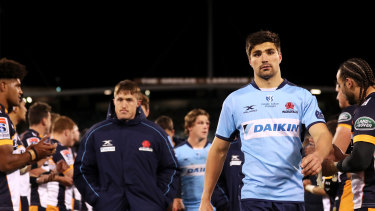 The Waratahs trudge from GIO Stadium after a 27-point loss to the Brumbies in August. Credit:Getty

"We are losing some really quality people and some quality players who have got a bucketload of experience within that group. That's definitely something you can't shy away from. It's fact. But we've got guys in and around Wallabies squads, which is going to be of benefit to them and us when they come back with us.

"It's been conflicting, your emotions to it all, but at the end of the day you understand that they've got to do the best things for themselves. There's a large number of people in time who I think will come back after they've had their opportunities elsewhere."

Coach Rob Penney has a vastly different roster to the one he inherited and one couldn't begrudge him feeling frustrated by a number of experienced heads walking out the door.

"He's had a lot of input into what it looks like next year," Doorn said. "You can't control the people that want to leave but you can control who you will keep.

"I'm not critical of the fact [a broadcast deal] has taken a long time to get to this point. It is what it is. That's sport. You've got to play the ball in front of you. There's no point worrying about what's happened in the past."

Asked whether he expected players to return to full pay next year – those not involved with the Wallabies at present are on 70 per cent of their salary – Doorn said: "It's one of the things we'll work through with Rugby Australia and [players union] RUPA. One of the things we'd all agree with is the need to sort that out sooner than later. There's no point waiting out til the back end of December. Feedback from players is the sooner we can provide certainty as they move into that December and January period, that'd be good."

Rapp said it was looking likely that Jack Dempsey, currently of contract in 2021, will remain at NSW.

Non Wallabies representatives will return to training on November 20.

Tags: and, as, Clark, exodus, Hunt, join
You may also like
Latest Posts