After he was sidelined for more than 660 days, Essendon favourite son Michael Hurley wasn’t sure he’d ever take to the field in the red and black again.

But there was a real buzz in the air on Sunday – despite the wintry conditions – as the red and black faithful turned out to their spiritual home, Windy Hill, to watch the now 32-year-old Hurley once again don the sash, this time in the VFL against the Gold Coast Suns. 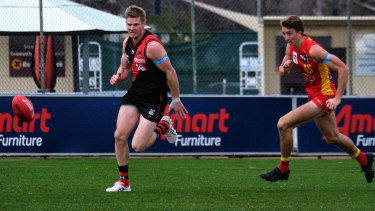 Michael Hurley in his comeback match against the Gold Coast Suns’ VFL side on Sunday.Credit:Luis Enrique Ascui

For Hurley, this was a case of baby steps on the road back from his debilitating hip injury.

After all, his last senior game for the Bombers was against Melbourne in round 18, 2020.

Since being drafted to Essendon in 2008 at No. 5, Hurley has played 193 senior games in the red and black but fans have had to wait almost two years to see him put the jumper back.

A nasty pre-season infection ruled the two-time All Australian out of the 2021 season, and saw him sent to hospital twice for surgery and bedridden for nearly a month.

He also lost more than 10 kilograms, including a significant amount of muscle mass, which led to a key focus of his rehabilitation being on strength and conditioning of his glutes and quads, and building his fitness back up.

When asked after the game on Sunday whether he thought he would ever play again, Hurley said at times yes, but at others no.

“At times I was bit concerned,” he admitted to The Age.

“I guess the last six months things have gone relatively well and the hip’s feeling good, so it’s nice to be back out there.

“When the infection first occurred, I had two operations to clean the joint out and get the infection out as a starting point, and it was about eight or nine months later I had semi-hip replacement. So, [I] had a few operations along the way but [I’m] feeling good now, [I] feel I’m covering the ground alright so [I’m] happy to back out there.”

This year, Hurley’s road to recovery also included some calf niggles, which further halted his return, but he was back at full-scale training this week with the playing group and played two quarters in the VFL, a promising indicator for his hopeful return to AFL level.

Hurley said his body had been standing up against the rigours of training for the past seven or so weeks, and that he would have played again a lot earlier had it not been for his calf issues. The hip, itself, has been coping well. 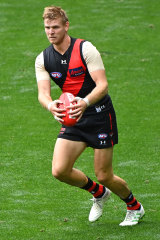 Michael Hurley last played for the Bombers in 2020.Credit:Getty Images

“I feel like I’m moving relatively well. I’m getting older now, [and] a bit slower, but [I’m] moving alright. So, it’s holding up.”

On Sunday, Hurley played in the forward line, starting at full-forward, and ran out half of the game before making his way to the coach’s box. As expected, he was rusty, and held to just five disposals – one of those a score assist – but the fans were just happy to see him back out there.

Getting Hurley back to a good bill of health has been Essendon’s first priority, and he admits there’s still no clear indication of when he may eventually return to AFL level.

During his time on the sidelines, Hurley has been involved in coaching and mentoring players, including coaching with the VFL side, but says he would love to be back out on the big stage soon.

“For now I’m just enjoying being back out there,” he said. “I’d love to play AFL footy again, but I understand it’s even a bigger step up from VFL, so would need certainly a few more games to get my fitness back, but [I] would love to play again,” said Hurley.

“I’d love to play for as long as I can, but I think the footy will sort that out. If I’m going at a high enough level, I’d definitely love to play again but if my time’s up, so be it.”