The great players live in two worlds. There’s this world, the perpetual shitfight in which nothing goes right.

Then there’s the world where they are playing the perfect game. Each kick lands on its intended 20-cent piece; each glorious cut-out pass thuds into every chest; each opponent is out-thought, out-manoeuvred, out-played.

The great ones chase this utopian game in their head, hoping to one day replicate it in real life.

It’s a game Nathan Cleary plays in his mind all day, every day.

During the off-season, he and his father Ivan were at CommBank Stadium for a shoot for an NRL commercial.

As the crew prepared for filming, Ivan started chatting with one of the producers before noticing after some time his son had wandered off.

He scanned the field and found Cleary, who was dressed in his Panthers playing kit, in a trance as he walked along the perimeter.

With ball in hand, he was feigning passes and kicks. He was stepping defenders who weren’t there. “He was shadow playing,” Ivan recalls. 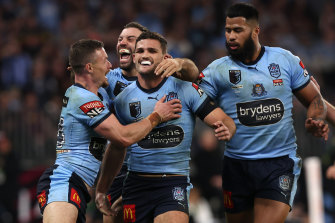 Nathan Cleary celebrates one of his two rapid-fire tries in as many minutes.Credit:Getty

When it was time for the cameras to roll, Ivan called his son over.

“What were you doing over there?” he asked. “I don’t know where I was,” Cleary laughed.

Andrew Johns knows where Cleary was. He’s been on that planet.

“Being a halfback is a lifelong obsession,” Johns says. “Only the great ones understand it and get it. It’s something where they watch every game. They think about footy constantly. They’re out on the field doing extras all the time. They have the ball in their hands all the time. The ball becomes an extension of their body. The game is their life and that’s Nathan.”

Few have been fanboying more than Johns about Cleary since the halfback’s performance in Origin II in Perth in late June.

It was close to the perfect game: two tries, eight goals from eight attempts, two line breaks and two try assists. His only blemish was one missed tackle. 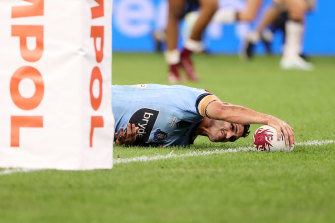 Cleary scores his first of two tries in Origin II.Credit:Getty

In the aftermath, Johns oozed that Cleary would finish his career as the best No.7 in history. This wasn’t hyperbole. His reasoning was based on Cleary’s age and the current trajectory of his career.

Most playmakers peak in their late 20s, even later as careers extend longer because of sports science. At 24, Cleary has barely reached playmaker puberty but already won a premiership for Penrith and three Origin series for NSW.

‘I am obsessed. Everyone wants to be perfect, but you can always strive for more.’

He knows exactly what Johns is talking about when I ask if he’s obsessed about his game.

“I am obsessed,” Cleary says. “Everyone wants to be perfect, but you can always strive for more. For a halfback, especially, rugby league is a 24-7 thing. You want a break from it but it’s always on my mind to improve. Sometimes, it stresses you out when things aren’t going right but that doesn’t stop you from trying.”

Most players do “extras” but the greats put themselves through exponential sessions, so they can master their craft.

Decades before Cleary and Matt Burton were launching torpedo kicks into the air, Eastern Suburbs five-eighth John Peard was spending hours on training paddocks perfecting “the bomb”. He would kick a hundred balls on the morning of the game to ensure his first kick that afternoon would land exactly where he wanted.

Bradley Clyde did 5km runs each week regardless of how many games he’d played. “Everyone wondered why he got back [onside] so quickly,” his former Canberra coach, Tim Sheens, says. “There’s your reason.”

Billy Slater had a freakish ability to catch the ball before it bounced because he studied hours of video of opposition kickers until he knew where and how they kicked the ball before they did.

Johnathan Thurston was known to drag a rowing machine into the middle of the field, row for his life, then immediately line up a goal kick from a difficult angle. He was simulating landing match-winning goals under fatigue.

As for Johns, he’s been wrongly pigeonholed as someone who played hard, lived harder. Few saw his solo runs up and down the stairs at Merewether Beach in the dark until he vomited.

Cleary’s infatuation with his preparation goes well beyond what most players are doing, whether it’s carrying around a thick journal full of plays or spending thousands of dollars blacking out his bedroom on the advice of a sleep specialist. He’ll pore over hours of video at night while sipping on a warm cup of bone broth to aid recovery. 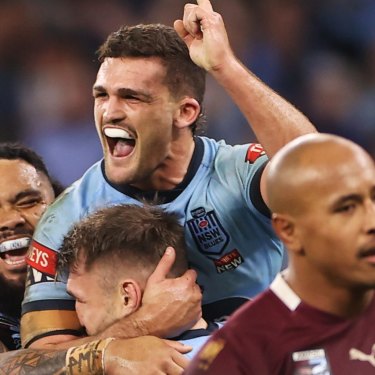 He walked onto Optus Stadium an hour before the Captain’s Run ahead of Origin II for kicking practise as his teammates waited inside the dressing-room. Captain James Tedesco eventually emerged to ask support staff what was going on.

Cleary was going through his kicking routine: short kicks, long kicks, place kicks, all sorts of kicks from a variety of angles. He wouldn’t move from the spot where he was kicking until he was striking them just as he wanted.

Eventually, the ball work session started but at its conclusion, Cleary picked up a kicking tee and set about finishing his routine. Later, the players waited on the team bus as their halfback sat in an ice bath in the dressing-room.

“That’s not uncommon to be honest,” Cleary says of doing so much kicking practice. “I have the same preparation for every game, so I have peace of mind. I want to take the field without any regrets. There were a few specific things I wanted to work on for that game that I put more focus into.”

Those specific things related to something Ivan had seen from the stands at Accor Stadium when NSW lost game one.

“I was at the game and I didn’t feel like he was hitting the ball that well at all,” Ivan says. “After the game, I brought it up with him and he said it was something simple around his technique. The way it was coming out.”

When NSW loses an Origin match, the halfback wears the blame like its eczema. Instead of running from it, Cleary owned it. “It’s on me,” he told reporters. “You’ve never fully got the game worked out. You think you’re going alright and then a game like this happens. Sometimes it’s not a bad thing.”

It spoke to Cleary’s maturity. He’s always seemed like an old soul, but this was different. “I’m proud of him for many reasons, but that’s the most,” Ivan says.

“I’ve never been prouder. I’ve coached a lot of footy, seen a lot of players, but I don’t know if I’ve ever seen anyone to do that. It wasn’t like he was backed into a corner and he had to do it. He just did it.”

Cleary was described early in his career as a “neat” halfback — which is unusual for young halves who usually overplay their hand — but he’s slowly added more flair to his game as the seasons go by.

Johns talks about playmakers understanding the “the feel” of matches. Knowing when to speed things up or slow them down. No player has manipulated the tempo better than Storm captain Cameron Smith.

Former Blues captain and current assistant coach Danny Buderus explains it this way: “There are no longer parts of the game like ‘softening up’ periods. It’s now mostly about winning the ruck. It’s about the speed of the game. The modern-day players get a feel for that speed and can control it. That’s the key to playmaking.”

Cleary was smart enough to learn from the mistakes made in game one. Because of Queensland’s rushing defence, especially their outside backs, he often felt he was playing in a phone box.

Late in the first half of game two, as the Maroons employed similar tactics, he was mature enough to adjust his game, whether it was playing flatter on the advantage line or stepping off his left foot and kicking deep, trickling the ball into the in-goal or finding space between winger and fullback.

“You need to be self-aware,” Cleary says. “The easy thing to do is make excuses. Through experience – and I’ve learned this through Dad – I take ownership when things don’t go right.

“I didn’t play as I wanted and the best way to handle that was to own it. If you’re in denial, you’ll be holding that within you. It’s hard at the time. It doesn’t come naturally. But you have to.”

On Wednesday night, Cleary attempts to become the first NSW halfback since Johns in 2005 to win a deciding State of Origin at Suncorp Stadium.

Another chance to get better. Another shot at perfection. Another opportunity to blow it – but still learn.

“As much as you want to be perfect, you never will be,” Cleary says. “But that doesn’t mean you can’t chase it. I feel like I’m just getting started.”

Watch the State of Origin decider exclusively live and free on Channel 9 and 9Now.