“Have you done enough Daly?”

It was the first question, and the only question really. 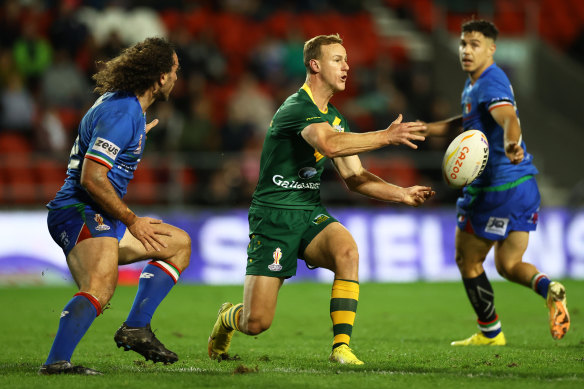 Daly Cherry-Evans answered it with the good grace he’s carried all tournament, and the air of a man who knows Nathan Cleary will be crowned Australia’s pre-eminent halfback some day, though no one is quite sure if that’s today.

“I don’t know, you’ll have to ask Mal,” the Queensland captain grinned after he and Cleary split the playmaking honours against Italy, three try-assists each and enough to like about both their respective performances as two halfbacks paired together.

“I was happy. It’s always a special moment to play for Australia. So to get a couple of more games in this tour has been really special and something I’ll always cherish. I’m definitely ambitious for more.

“I’d love to be a part of it but either way I’ll help the team get forward and hopefully do something special.”

In Cleary’s favour is top billing as the form club halfback of the past three seasons, back-to-back premierships as the linchpin of Penrith’s relentless attack, his combination with Isaah Yeo and a near-record 28 points on debut against Scotland.

For Cherry-Evans, there’s the incumbency, two out of the past three Origin series wins with Queensland, his playmaking combinations with Cameron Munster, Ben Hunt and Harry Grant, and the fact Cleary’s 28 points came against Scotland.

As Mal Meninga said in outlining the on and off-field chemistry that goes into his call on the Kangaroos scrumbase, “I can’t lose”.

Meninga will review the pair’s performance against Italy and make the call early in the week before Friday’s quarter-final, most likely against Lebanon and Mitchell Moses. 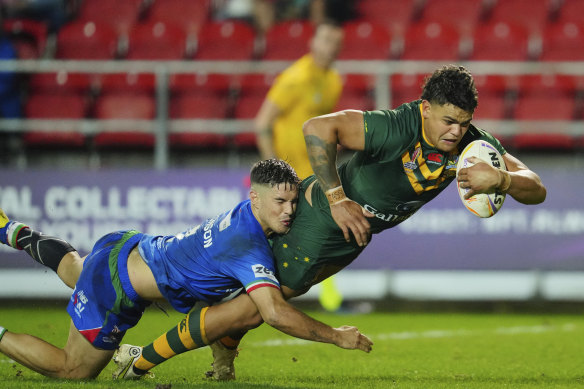 Both Cherry-Evans and Cleary denied they will be sitting around the team hotel waiting on tenterhooks in the meantime.

Cherry-Evans is Australia’s most experienced player on tour and has been around the Kangaroos set-up, with plenty of time out of it along the way, for more than a decade.

Should Cleary get the nod, it’s hard to see him giving up what should be the No.7 jersey any time soon.

Meninga has already said as much, though he was hardly Robinson Crusoe when he tipped Cleary into a long and fruitful Kangaroos career earlier in the tournament.

With his standing in the Australian camp in mind, and perhaps Cleary’s too, Cherry-Evans assured reporters the regular speculation – worded in all manner of different ways – isn’t getting to him.

And if Meninga’s selection call goes against him, that won’t either.

“I knew what I was signing up for, Mal told me before I came that this would be an open competition and that I’d have to fight for a spot,” Cherry-Evans said.

“I love those competitions. I was either going to be playing for Australia (deep into the tournament) or having to be a bit selfless and do something for a young group coming through.

“Either way I’m hoping to have an impact on this World Cup. Ideally that’s on the field, but if not I’ll still help this group.”