Roosters superstar James Tedesco has officially severed ties with Isaac Moses after paying more than $30,000 to cut a settlement deal with his former agent.

Tedesco hasn’t allowed the messy divorce, which was settled prior to his departure for the World Club Challenge, to affect his performance. The former Tigers fullback has been dealing with the issue for most of last year but has still emerged as arguably the best player in the world. 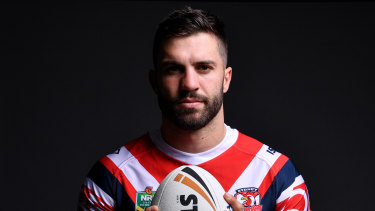 James Tedesco is one of the few NRL stars without a manager.Credit:NRL Photos

The future for Moses is less clear. Considered one of the most influential six-and-a-half-percenters in the game, the NRL issued him a breach notice to show cause why he shouldn’t have his accreditation suspended or cancelled for "counselling or assisting a person to not cooperate fully with the NRL integrity and compliance unit".

Moses disputes the allegation and is one of three agents waiting for the NRL to make a final determination on their future.

Tedesco, meanwhile, is enjoying taking on a greater leadership role this season. The Roosters No.1 was one of the star attractions for Fox League’s season launch at the SCG on Tuesday.

Tedesco and Luke Keary have been elevated into the leadership group to help fill the void left by veteran halfback Cooper Cronk. The tricolours’ leadership group also includes captains Boyd Cordner and Jake Friend, as well as Mitch Aubusson and Jared Waerea-Hargreaves.

Asked if he had aspirations to captain the club, the Blues vice-captain said: “I guess so. I want to be a leader on and off the field.

“Looking around our club there are so many leaders. I think (coach) Trent (Robinson) sees that in me and encourages me to speak up. He feels some of the boys listen to what I say and I can lead in that way.

“I guess that was shown being VC of the Blues as well. I like that sort of role. We’ve got a lot of leaders in our team and I’ll learn as much as I can off them. I’ll keep working up the ranks and I’m happy to stay behind them as long as possible because they lead the team very well and they are good examples of being a good leader.”

Tags: best, I, Moses:, NRL's, sacked, Why
You may also like
Latest Posts