Jake Stringer came alive and Kyle Langford could not have timed his first goal of the season any better, as Essendon posted a thrilling nine-point win over the Sydney Swans at the MCG on Saturday.

The Bombers trailed by 16 points at the nine-minute mark of the final term but Stringer, goalless and with only 11 touches to that point, booted two goals (one a check-side stunner) and delivered a slick pass to Langford in the pocket, who converted, ensuring the Bombers two big wins in three rounds.

Having toppled St Kilda two weeks ago, the Bombers showed their renewed toughness in the final term, dominating contested possession and clearances to record just their fourth win of the season. 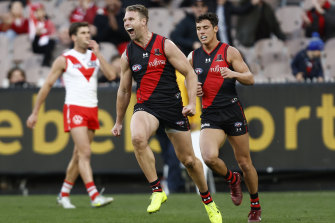 For the Swans, it was a dispiriting defeat, leaving the visitors with nine wins and a major battle for a top-four berth.

The dashing Nick Hind, midfielder Zach Merrett, skipper Dyson Heppell and Massimo D’Ambrosio were busy all day but it was the man nicknamed “The Package” who will dominate the headlines. He conceded 50m penalty which allowed Chad Warner to goal, cutting the lead to three points with two minutes remaining, but it did not matter.

“It’s pretty nice, I thought I was going to be the villain. Hopefully, we get some continuity and get some more wins,” Stringer said.

“This group they stick at it – that’s a good thing about them. The performance we put in against Sydney was poor and we had something to prove.”

Parker, in his 250th match, was superb with 25 touches (nine clearances), as was Warner, while Lance Franklin, on a day club chief executive Tom Harley said the Swans wanted him to play on next season, had two goals, and a crunching tackle to end the third term which resulted in a crucial goal. However, he sprayed a vital set shot in the final term.

The Bombers regained the lead when Darcy Parish completed a courageous mark, and found Mason Redman just outside 50m. Merrett then provided a clever shepherd, allowing Redman to run around and drill a long bomb.

It was the second time the Bombers had lifted. The Swans led by 26 points early in the second term and had the opportunity to slam the door had Tom Papley and Sam Reid converted regulation shots. But the Bombers, too often stagnant to that point, fought back, with the hard-running Hind taking territory. The Bombers booted the next five goals, beginning when Sam Durham won a free kick against Reid.

The Swans pressed in the third term (20-6 inside 50s) but had eight straight scoring shots which were all points. The Bombers’ defence, including Jordan Ridley, Brandon Zerk-Thatcher and Mason Redman, held up well but the dam wall finally broke when Isaac Heeney marked and goalled, and a crushing Franklin tackle led to a Will Hayward major just as the siren sounded.

The Swans had won more final quarters than any side this season (12) but, on this day, they were denied.

Bombers’ defender Jake Kelly had only one career goal in 123 matches before Saturday, so was naturally delighted when he found himself on the end of a pair of slick handballs to convert a running goal in the third term. It was just what the Bombers needed, for they regained the lead.

Parker put to bed the controversy from round nine when he taunted Dylan Shiel. Much was made of that incident – Swans boss Harley was even questioned about it again pre match – but there was no reprisal at the MCG. Despite hearing the jeers from Bomber supporters, Parker went about his business in his typical robust manner, while Shiel had a solid afternoon.

Isaac Heeney complained of a foot issue in the first term but made the most of his limited touches. His late goal in the third term and handball to Callum Mills in the final term almost dragged his team to victory.

Papley is one of the league’s great entertainers – good and bad. His speed and creativity – not to mention his celebrations – are a weekly highlight, and these were on show in the opening term when the Swans too charge. Papley had a left-foot snap from about 25m which gave the Swans their first goal, and he had a direct hand in their fifth which led to Reid’s mark and goal. However, his work in front of goal slipped from there.