Richmond star Jayden Short was once a “small little chubby kid” but the dual premiership player and Jack Dyer medallist has signed a five-year contract extension, ensuring he will be a key piece in what shapes as a coming rebuild.

The Tigers said on Friday the 26-year-old will remain at Punt Rd at least until the end of 2027 after hard-running midfielder having eschewed free agency.

Short has played 121 games largely as a running half-back since being selected in the 2014 rookie draft, but excelled in a new role as a frontline midfielder against the West Coast Eagles last Friday with 31 disposals, five clearances and 792 metres gained.

“It is really exciting. I am very lucky and grateful for the club giving me a long-term contract,” he said.

“I want to repay the club. I have had some very good times here already, and I am looking forward to the next five years. I started as a small little chubby kid, probably just trying to find my way, and I have had some great people around me that have taught me how to be an AFL footballer. 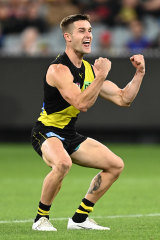 “It has been a good journey and something I am very proud of. Now I am looking forward to building on that and continuing to try and get better each year.”

Short won the best and fairest in the 2020 premiership year and has become a strong leader.

“Jayden has been a consistent performer for us across recent years, and this contract extension is a reward for his application across that period,” he said.

“He plays football the Richmond way and is a popular teammate and person around the football club. We are looking forward to seeing him continue to improve his game across the next five years.”

The Tigers face Collingwood at the MCG on Saturday, and have Dustin Martin back in the fold after the superstar had time off to deal with the death of his father.