A teary Viliame Kikau has revealed he feared he had blown his chance at winning an NRL premiership after being suspended during the finals as Penrith prepare to unleash their most lethal attacking weapon on Melbourne.

Kikau, who sat nervously in the ANZ Stadium grandstand as Penrith squeezed past South Sydney to reach their first grand final in 17 years, missed the match after being banned for a dangerous throw on Jared Waerea-Hargreaves. 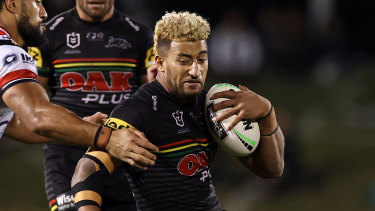 Viliame Kikau will return from suspension for the grand final.Credit:Getty Images

"When [Adam] Reynolds did the kick and the game was over all the boys next to me were shouting and I was just standing still looking at the referee waiting for him to blow the whistle. I didn't know if the game had finished or not.

"When he blew the whistle it was the most relieved I've ever been. It was an unbelievable feeling."

Kikau could be one of 14 Panthers making their first grand final appearance with captain James Tamou, hooker Api Koroisau and bench forward Zane Tetevano having played in deciders with other clubs.

"Something that has stuck with me is our assistant coach Cameron Ciraldo came to me and said, 'this is a great opportunity'," Penrith centre Stephen Crichton said.

"A grand final in my first year … I'm so grateful to be a part of this team and do all the hard training with the boys. It's good to see it paying off. I don't want to waste this opportunity as it won't be the same next year with a few boys leaving. Our assistant coach Trent Barrett is leaving.

"I really want to take this opportunity with both hands."