Footballers hate it when outsiders question their on-field effort, but when it comes directly from the coach in the public domain, as was the case with Waratahs boss Rob Penney on Wednesday, it is a totally different story.

With his side languishing on the bottom of the Super Rugby ladder with three losses from as many starts, Penney expressed frustration and gave his players a dose of reality when he said he was not getting 100 per cent commitment from every squad member. 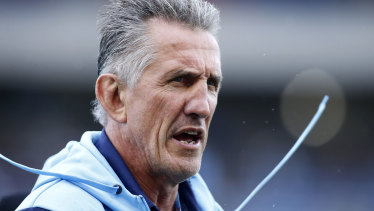 Rob Penney has had a tough start with the Waratahs. Credit:AAP

If these comments don’t evoke a reaction from the group in Friday’s clash with the Lions at Bankwest Stadium, nothing will.

At the end of the day, if effort isn’t delivered in spades, a coach has every reason to be unhappy.

On the surface, Penney appears reasonably level-headed following the Waratahs’ worst start to a Super Rugby season. He offers encouragement and empathy for a young group desperate to chalk up a win, but if the losing run continues, he could become even more forthright in public.

“The clock doesn’t stop ticking,” Penney said. “There is going to be a need to get some results. For Waratahs rugby we need to be better than what we are.”

Penney doesn’t want to rub people the wrong way a month into his tenure as the club’s long-term coach and this might explain his decision to stick with a largely unchanged side for the round five match.

Five-eighth Will Harrison earns his fourth start in a row in a stable back line that will include Mark Nawaqanitawase, who returns to the starting side in place of Cam Clark, who drops out of the match-day 23.

Randwick’s James Ramm is in line to make his Super Rugby debut off the bench, while Lachlan Swinton replaces Jed Holloway at No.6.

Ned Hanigan is still unavailable for selection due to an ongoing concussion issue.

The Waratahs have lost their past five matches to the Lions, who have one win and two losses to their name in 2020.

“They’ll be difficult, but not insurmountable,” Penney said.

Tags: 'If, chan, don’t, improve, things
You may also like
Latest Posts