Parramatta coach Brad Arthur doesn’t seem like someone who watches Will Ferrell movies in his spare time.

But this week, in preparation for the biggest match of his coaching life, he might consider showing his players Talladega Nights: The Ballad of Ricky Bobby.

Because Ricky, a NASCAR legend who “pisses excellence”, has an important message for Arthur, his players and Eels fans: “If you’re not first, you’re last.”

If the Eels can’t get past North Queensland in Townsville on Friday night, the season should be considered a failure — for both the coach and his players.

The semi-final win over Canberra on Friday night took the Eels one week deeper into the post-season than ever in nine seasons under Arthur. 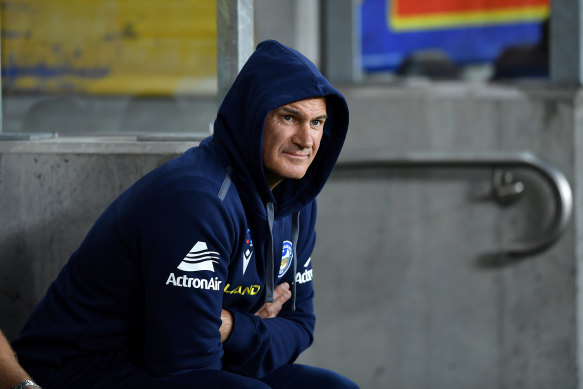 Brad Arthur has struggled to get beyond week two of the finals in previous years at the Eels.Credit:NRL

Parramatta chairman Sean McElduff told the Herald this “justified” the board’s decision in October last year to extend Arthur’s contract until the end of 2024.

“Brad has done a good job for us,” McElduff said. “He deserved to get an extension, and he’s justified it. I’m not sure we needed last night’s result to vindicate it. There’s a number of factors that go into whether you’re successful, not just one game. We’ve been in the finals for the last four years, and now we’re going to a prelim final. It’s a pretty good effort.”

In some respects, McElduff is right: success isn’t always reflected in the results of matches.

The growth of a player, on the field but also off it, is an intangible victory for a coach, and one rarely understood or seen by those outside the club.

Former Parramatta coach Brian Smith never won a premiership, but it’s not difficult to find former players who tell you how much they learnt from him.

Just as nothing tastes better than skinny feels, though, there’s no better feeling in sport than holding a shiny trophy above your head. Smith has often said he doesn’t consider success in terms of grand finals won — but what, in his quiet moments, would he have given for just one?

He often had outside forces working against him, not helped by picking fights with powerful members of the media, and so it is that Arthur is now battling outside noise about “division” and “nepotism” within his club.

A summary of the report into junior pathways conducted by former Warriors coach Nathan Brown was leaked to Fox Sports last Thursday, the day before the Raiders match.

It was clearly an attempt to undermine Arthur on the eve of his biggest match as coach.

To Fox Sports’ credit, the story made it clear that the line about “nepotism” had nothing to do with Arthur picking his son, Jakob, in the NRL side.

Rather, it’s about fathers picking sons in under-16s teams. This happens in every club, every system, at every level.

Nevertheless, talk won’t abate about the Eels being a divided group because of Arthur’s team selections, including him continuing to overlook back-rower Nathan Brown.

For a divided side, the Eels seem to be going all right: they’re in a preliminary.

As for Brown, if the coach doesn’t want him in his side, that’s on the coach. His football this year has been nowhere near his best. He has one year remaining on his contract and wants out — but where are the other clubs banging down his door?

Arthur has endured many tricky times during his tenure, not least a salary cap scandal that prompted a rebuild from the ground up, but the way he brushed aside the leaked report shows how far he’s come.

In the past, a story like that would’ve consumed him. The witch-hunt would still be going.

Instead, he didn’t raise it with his players before the semi-final, then dismissed the story in the post-match media conference.

Friday night’s match against the Cowboys represents his best chance of winning the club’s first title since 1986 — which was their fourth premiership in six years, such was the Eels’ dominance of the 1980s.

It could be his best chance for some time with Reed Mahoney, Isaiah Papali’i and Marata Niukore leaving at the end of the season.

Parramatta’s big, mobile pack dominated Canberra’s, shutting down their offloads, which have become a crucial part of any team’s attack again.

The Eels have organised a charter flight to Townsville, and if they don’t return with a place in the grand final secured, they may as well redirect the flight to Bali.

Nothing less than a premiership will justify Arthur’s time as coach because, whether it’s rugby league or NASCAR, if you’re not first, you’re last.