The might of the English set pieces brought Australia’s World Cup run to a sodden end in New Zealand on Sunday.

The Red Roses – the first women’s Test side to turn professional in 2019 – ran in six tries to the Wallaroos’ one to advance to the semi-finals of the tournament, where they will meet the winner of the Canada v USA quarter-final. France will play hosts New Zealand in the first semi-final at Eden Park next Saturday.

Australia fought hard to make it out of the group stages, fighting back from an opening loss to the Black Ferns to beat Scotland and Wales to advance to the knockout rounds.

They dared to dream at Waitakere Stadium in Auckland, hoping a fast start would help them build a buffer against the Red Roses, who were sitting on 28 straight wins coming into the match.

But the fundamental mismatch of the teams’ resourcing told in the end and was not helped with a torrential downpour turning the pitch into a slip-and-slide as the match kicked off. 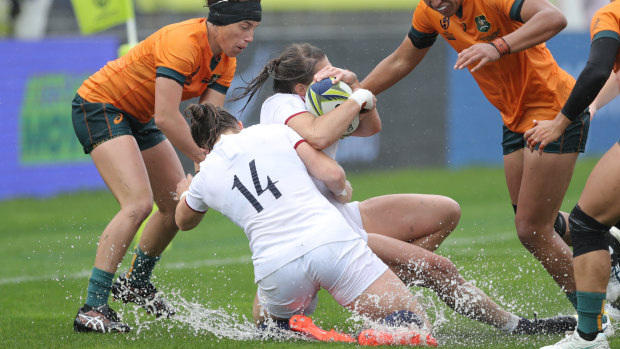 Soaking rain turned the pitch into a slip-and-slide in Waitakere on Sunday. Credit:Getty

England’s women have been training full time for three years on professional contracts and playing club rugby in the professional women’s UK Premiership, while Wallaroos players all hold down full-time jobs or study commitments. The period they spent in camp in the lead up to the tournament was the most time they had ever spent together.

Dual international Sharni Williams, who joined the Wallaroos after a long career with the professional Australian Sevens program, said she was proud of the side’s first-half effort.

“We’re pretty gutted, obviously we love to win but that wasn’t the case today. We did absorb a lot of pressure and we knew they were going to come out firing and they did,” Williams said. 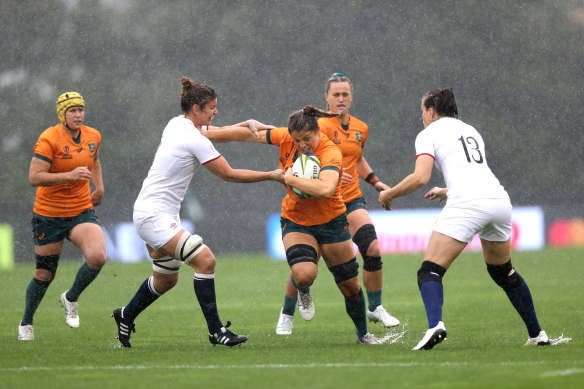 Grace Hamilton on the charge in the sodden conditions.Credit:Getty

“We came into this the underdogs and we’re still underdogs within rugby. Let’s hope we can find some sponsors out there, find a bit of money and reward these girls for what they’re doing. We’re out there putting our bodies on the line for each other but mainly for Australia.”

Emily Chancellor scored Australia’s only try just before halftime, giving supporters a glimpse of what the Wallaroos are capable of when conditions and their own accuracy also line up.

But with Australia’s lineout faltering badly and the side’s discipline working against them again, England made it one-way traffic. The Red Roses spent nine minutes of play in Australia’s 22m zone, forcing the Wallaroos to defend for long stretched. Australia, on the other hand, spent just 25 seconds in England’s attacking zone.

The most capped England player of all time, Sarah Hunter, put England on the board with a pushover try in the eighth minute of her 138th Test, helping the favourites off to a 7-0 lead.

Openside breakaway Marlie Packer scored a hat-trick, while No. 8 Abbie Ward and hooker Amy Cokayne added their own tries.

England led 19-5 at halftime and used their rolling maul and scrum to deliver another three in the second half. Center Emily Scarratt struggled on the kicking tee, converting only two of her team’s six tries.