Western Bulldogs vice-captain Mitch Wallis has been told he needs to be a consistent, influential performer in the VFL but does not need to reinvent himself to reignite his stalled AFL career.

Wallis, 28, off contract at the end of the season and an unrestricted free agent, will be a target of rival clubs if he and the Dogs believe it’s best to part ways. 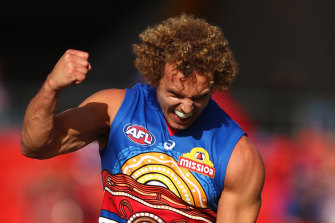 Mitch Wallis has not played in the Bulldogs’ senior side since round two.Credit:Getty

He was the club’s leading goalkicker in 2020, booting 25 majors, but hasn’t been seen at the top level this season since round two, when he was dropped after two goalless performances.

Despite his leadership role, Wallis has remained at home with the club’s VFL squad and not with a 27-man senior unit that is training in Sydney and will head to Perth later this week to face the Dockers, because of Victoria;s latest lockdown.

“Mitchy and I have had some good walks and chats in recent times. He knew he wasn’t going to play this week against Fremantle,” Beveridge said on Tuesday.

“To have him back in Melbourne and looking after the other 17, as much as they will put their best leadership foot forward, that was important for us as well.”

Wallis is a mid-sized forward but he has been unable to reclaim a spot in attack featuring talls Josh Bruce, Aaron Naughton and Tim English, the clever Mitch Hannan, a bevy of speedy smalls and, at times, the class of skipper Marcus Bontempelli.

“Mitch doesn’t need to reinvent his game. The boys who have been selected when there have been opportunities have been in our best handful of players at state-league level the week before and the three weeks leading up, sometimes,” Beveridge said.

“Cody Weightman is a good example – he had been in good, consistent form and we picked him and that really franked itself and he has been terrific since he came in in the last couple of games.

“Mitch is just aiming to be that influential player at state-league level and that will be rewarded. We just haven’t quite seen that yet and he understands that.”

Bulldogs great Brad Johnson has suggested North Melbourne and Carlton would be a good fit for Wallis.

The Bulldogs have made an impressive start to the season with a 9-2 win-loss record but their defeats have been against fellow flag favourites Richmond and Melbourne, the latter last Friday night when the Demons halted the Bulldogs’ clearance game.

Among the Demons’ tactical surprises was sending James Harmes to Tom Liberatore, rather than to Bontempelli or Jack Macrae. Liberatore, averaging 25 disposals per game, was held to 16, and lacked his typical extracting impact.

“We talked about it [on Monday]. Libba, he likes to fight his own battles, but he was probably isolated and that’s not what we do,” the 2016 premiership coach said.

“I think that’s the message – because those three [Liberatore, Macrae and Bontempelli] have lost some of their comrades … so now there is less of a depth of inside mids going through there and we need to find some boys that are going to support that act.”

Macrae had 36 touches and Bontempelli 30 against the Demons, with Beveridge lamenting his team’s poor ball use and looking forward to a rematch in round 20 at the MCG when he hoped veteran ruckman Stefan Martin would be back to help tackle Max Gawn.

Beveridge called for the entire salary of AFL senior coaches to fall outside of the football-department cap..

League officials have floated the possibility of 20 per cent of the coach’s wage being outside the soft cap but Beveridge, while welcoming this, said the full salary should be exempt.

“I don’t think others should be penalised for what the senior coach gets paid,” he said.

“I am really paranoid about the ratio of what I get paid compared to everyone else under the soft cap. It creates a stress for the senior coaches.

“It’s well known that we are all at the higher end of the scale – and as much as most of us took somewhere between a 25 to 30 per cent cut last year … we are already getting paid a fair bit.

“I think the whole lot should be out of it and then it’s just up to a club’s discretion to pay their senior coach what they want.”

Beveridge has also called on the AFL to “cop a hit in the short term” and invest in the sport at all levels, and cease the cuts which have led to a swathe of job losses at community level.

Tags: ‘Influential’:, Bever, Luke, What
You may also like
Latest Posts