Adelaide absorbed a chaotic deluge of injuries and a fierce Geelong fightback to produce a courageous, captivating boilover for the ages.

Last year’s wooden spooner looked to have broken last year’s runner-up with a devastating display of ferocious chasing and tackling, skilful linkwork and clinical forward finishing to open up a 43-point third-quarter lead before the Cats charged back into the contest. 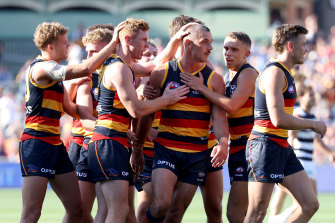 Taylor Walker is congratulated by teammates after scoring in the Crows’ win over Geelong.Credit:Getty Images

Geelong opened Adelaide up and sliced the deficit to 19 points at three-quarter-time and 11 points with four minutes left in the fourth when Gryan Miers goaled but the Crows somehow held on, despite a monster injury ward and overwhelming odds against them.

Cats superstar Patrick Dangerfield faces an anxious few days with his decision to bump Jake Kelly likely to come under MRO scrutiny after his clash of heads left the Crows defender bloodied and concussed. 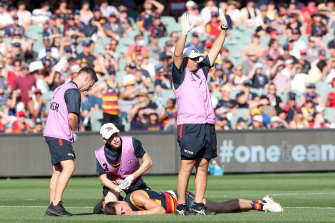 Jake Kelly of the Crows lays on the ground after a clash with Patrick Dangerfield.Credit:Getty Images

Dangerfield (26 disposals), stewing all off-season on a disappointing display in last year’s grand final loss to Richmond, overcame a quiet start when he was sitting in the goalsquare to help Rhys Stanley will the Cats back into the contest.

Adelaide set up the victory with a stunning, scarcely believable first half. Taylor Walker wound back the clock with five goals, his fourth coming after the half-time siren to give the Crows a 38-point lead and have the Adelaide Oval crowd in raptures.

The fans, who sat through a torrid, forgettable 2020 campaign, were on their feet with a quarter-time standing ovation with Walker a match-winner, Rory Laird prolific and Ben Keays, Brodie Smith and Rory Sloane inspirational. 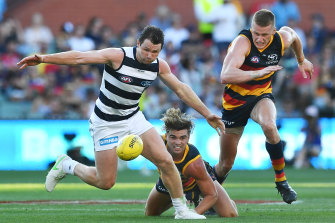 WALKING WOUNDED
Adelaide activated their injury sub early in the second term when Luke Brown sustained an Achilles injury and was subbed out for Mitch Hinge early in the second. But the Crows’ bench was left short-changed when Kelly was stretchered off the arena later that quarter after his collision with Dangerfield. Sub Hinge then came off after hurting his right shoulder – the same one he injured during training last month – before returning to the field … and re-popping it. Then in the fourth stanza, Cat Sam Menegola came off after injuring his left shoulder, capping an afternoon of rare attrition.

SON OF A GUN
Inaugural Crows rover Stephen Rowe was a proud, emotional father on commentary duties in the FiveAA box when his son, debutant James Rowe, slotted his first goal. “Good boy!” Rowe snr screamed after his lad goaled on the run in the second period, before jumping into Walker’s outstretched arms and being mobbed by his teammates. Rowe then marked and converted his second midway through the third and followed up with what will almost certainly become a trademark wild celebration to extend Adelaide’s buffer to a match-high 43 points.

Tags: Cats, Crows, hold, Injury-hit, off
You may also like
Latest Posts