Richmond and Shai Bolton will donate $20,000 to an organisation that runs workshops on “healthy masculinity” after an AFL investigation found the star made a nightclub fight worse when he stepped into defend teammate Daniel Rioli’s girlfriend.

Bolton underwent surgery for a fractured wrist suffered earlier in May because of the incident, while Rioli was left with a black eye but has missed no football. 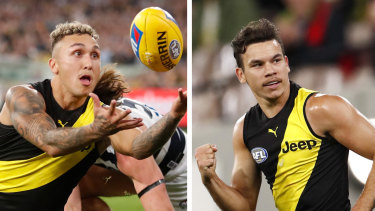 The club said Rioli’s girlfriend had been subject to “innapropriate behaviour” by another nightclub patron, at which point a fight broke out involving the patron, Rioli and Bolton.

“Rioli has been cleared of any wrongdoing but the investigation found Bolton had exacerbated the situation through his actions,” a Tigers statement read.

“Bolton acknowledged his decision to become involved in the altercation was the wrong choice and that violence was never the right response.”

Bolton, who is one of the biggest names out of contract at the end of this season, said he had thought about “what could have happened as a result of my actions”.

“When I saw what happened to Daniel, I acted on instinct. I now know that my instincts were wrong and that my actions could have led to a far more serious outcome,” he said.

“I want to say publicly that I made the wrong choice, and I am sorry for getting involved in the manner that I did.

“The right choice is to walk away from trouble or for me to do whatever I could to stop what was happening and not do something that could make it worse.

“Violence is never OK no matter the circumstances, and I want to share that message with everyone. The right choice is to walk away.”

Richmond’s chief executive Brendon Gale said the club did not condone any form of violence.

“We encourage our players to do everything possible to de-escalate these situations and to walk away, regardless of the circumstances,” Gale said.

“Getting involved in any altercation is not OK and that is a message we will reiterate to our players.

“These can be highly volatile situations and Shai has acknowledged his mistake. We all need to learn from it.”

Richmond and Bolton will donate $20,000 to Tomorrow Man, which according to the club “works with boys and men to develop healthy masculinity”.

The AFL said Rioli had been cleared of misconduct but Bolton had acknowledged he should have “de-escalated” the situation, rather than get involved.

AFL general counsel Andrew Dillon said, “The investigation concluded that Shai’s actions on the night had the potential to cause a much worse situation for all involved.“

“Shai understands the choice he made was the wrong one, he has acknowledged his mistake and is now accountable for his actions.

“This is a message that is bigger than our playing group, it is a message to everyone in the community, regardless of age, profession or circumstances – walk away, violence is never the answer.”