Former Carlton list manager Steven Silvagni has questioned whether the Blues need to sign Sydney’s George Hewett but has backed their bid to land Fremantle’s Adam Cerra through the trade period.

Hewett, a hard-running, big bodied defensive midfielder, is a restricted free agent but is likely to sign with the Blues on a four-year deal worth up to $1.8 million. However, Silvagni has declared a player of his type could be developed internally by the Blues. 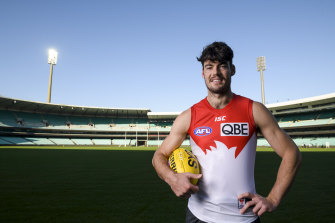 On the move? George Hewett.Credit:Rhett Wyman

“It’s an interesting one. I think he is a really good player but is he the type of player Carlton need? I think they have got players on the list that could do his role, develop into that role, but, obviously, they are looking for someone who can play off half-back, also in a tagging role,” Silvagni said at the launch of Trade Radio on Wednesday.

Hewitt’s inclusion could mean veteran Ed Curnow, who has inked a one-year contract extension, will be tipped from the side. Will Setterfield and Matthew Kennedy, the latter off-contract, can also play as defensive midfielders.

“I just feel he [Hewett] is a good player, don’t get me wrong, and may be in their best 22, 23, but I think he is the type of player you can develop on your list. But he brings a sense of hardness and some run for them. The question is, what happens with Ed Curnow now? Where do they play him?” Silvagni said.

“It’s pretty much that inside tagging role, probably struggles at half forward when he is there, so it’s going to be an interesting mix.”

The Blues, as confirmed in the report that led to the demise of coach David Teague, were seen as being overly offensive this season. Patrick Cripps and Sam Walsh, the latter finishing fourth in the Brownlow Medal count, are offensive weapons, but a new coach knows he must tighten this area of the ground where the Blues leaked a run of five goals or more too often. The Blues’ current head of list management is Nick Austin.

Cerra, the wantaway Docker midfielder, is firmly in the Blues’ sights, while Melbourne have also spoken with him.

The Dockers are set to seek the Blues’ first pick in the draft, at this point No.6 overall, and may want more for a 21-year-old yet to reach the peak of his powers.

“He is a first-round pick and if he was to go to Carlton, well, their first-round pick, I would think would get the deal done,” said Silvagni, who rebuilt the Blues’ list under former coach Brendon Bolton.

“There is no doubt Fremantle would want a bit more but, ultimately, I would think if he does choose Carlton, Carlton are in the box seat.”

Cerra, the No.5 pick in the 2017 national draft but ranked an “average” kick by Champion Data, rejected a four-year contract offer from the Dockers worth about $750,000 a season.

Sam Petrevski-Seton’s decision to seek a trade to the West Coast Eagles may impact the Cerra deal, for Perth native Petrevski-Seton, who has played 94 matches over five seasons, loomed as part of a deal.

Silvagni said he was unsure what Petrevski-Seton, 23, was worth in terms of a trade, as he had not yet reached his “ceiling”.

“At his best, he is a really, really good player but certainly hasn’t played at his best over the last 12 to 24 months. Who is responsible for that? Ultimately, it’s the player, but I certainly think he has been played out of position,” Silvagni said.

“He was brought to the club as a midfielder-forward, he has been playing half-back pretty much the last 12, 24 months, so that doesn’t help him.

“What is he worth? That’s a real difficult one because his ceiling is very, very high but, yet, he hasn’t reached that at present.”

The Demons do not have a first-round pick at this point.

Silvagni’s son, Jack, signed a two-year contract extension with the Blues on Tuesday.

The senior Silvagni, a two-time premiership great of the Blues, fell out with then chief executive Cain Liddle and former president – and former close friend – Mark LoGiudice when he was list manager in 2019, and left in messy circumstances. Silvagni last year declared that Liddle even believed he would “sabotage” the trade period if they had kept him at the club.

Tags: 'They, he, is, need, PLAYER, THE
You may also like
Latest Posts