When Mal Meninga embarks on a reconnaissance mission to England, he will have one eye on the upcoming Rugby League World Cup and the other looking over his shoulder.

As ever, the Kangaroos will be favourites to hold the trophy aloft when the 2021 edition of the tournament is belatedly staged in October. Having lost just one of the past nine tournaments stretching back to 1975, favouritism is a familiar burden for the men in green and gold.

However, complacency will be the least of Meninga’s concerns given the strength and depth of the opposing squads. Only so much should be read into the world rankings, given that internationals haven’t been played for almost three years due to COVID-19, but New Zealand are currently No.1, England are second, Tonga third, while Australia are fourth.

All will consider themselves genuine contenders for the showpiece event, while Samoa loom as a wildcard, particularly if eligible Panthers stars Jarome Luai, Brian To’o and Stephen Crichton preference the Pacific nation.

Next weekend’s representative round will showcase the challengers to Australia’s superiority when Tonga take on New Zealand in Auckland, while Campbelltown hosts a Test double-header between Samoa and the Cook Islands, and PNG up against Fiji.

Kiwis coach Michael Maguire – who will field a strong spine comprising Dylan Brown, Jahrome Hughes, Brandon Smith and Joseph Manu at fullback – has never seen the world game in such a strong position.

“You look at the teams that get listed, I don’t think it’s been like this before,” Maguire says. “It’s growing and even Lebanon’s performance in the last World Cup; there are other nations developing a lot of players, which is important for the international game.

“The Kiwis are very passionate about playing for their country and representing their people. That’s what international footy stands for. I know the NRL and Origin is a big piece but, to the Kiwis and the Pacific Islanders, it’s their opportunity to show who they are as well.”

Tonga has every reason to feel buoyant about its prospects. Kristian Woolf’s team has beaten Australia, New Zealand and England in recent meetings and the Tongan government has indicated it could invest up to $1 million to bolster the nation’s World Cup bid. Players could be in line for bonus payments should they hold the trophy aloft, resulting in them being properly remunerated for the first time.

However, it has never been about the money, as evidenced by Jason Taumololo and Andrew Fifita turning their backs on the riches on offer in State of Origin to represent their heritage.

“That’s something the game needs to applaud a bit more, the sacrifice those guys made, the impact they made with their decisions,” Woolf says. 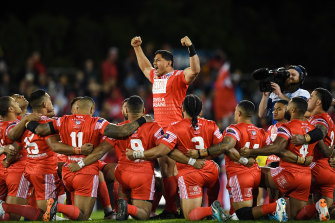 Tonga enjoys tier-two status, meaning players such as Kotoni Staggs and Daniel Tupou can represent NSW and the Pacific nation. However, that could change if they continue their climb up the rankings.

“If they are going to lift the World Cup in October, which is a real possibility, then we would obviously explore that,” says International Rugby League chairman Troy Grant.

The knock on rugby league, particularly from rugby union enthusiasts, is that it isn’t a global game. However, the rise of the Pacific nations as a force is changing that.

“We used to get mocked that only two nations, maybe three, could ever win anything,” Grant says. “We now have five countries that could win the trophy and another two, in Fiji and PNG, that could cause a boilover on their day. If the players who could play for Samoa do play, that could follow the Tongan rise very quickly.”

Even some of the more obscure league nations are contemplating moves to fast-track their development. For instance, Italy has engaged Tim Sheens as a coaching director, Terry Campese as assistant to coach Leo Epifania, and Tony Grimaldi as strength and conditioner. The Italian rugby league federation has even discussed the prospect of approaching Andrew and Matthew Johns about becoming involved.

Should that come to pass, the Johns brothers would be plotting the downfall of Australia when the teams face off in the World Cup on October 29, the first clash between the nations in 54 years. 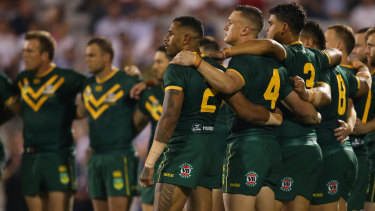 The Kangaroos will be favoured to win the World Cup, but they won’t have it all their own way.Credit:Getty

Meninga acknowledges that the challenge is very real, which is why he’s about to head to the United Kingdom to check out the venues and facilities. Traditionally, the Australian coach has had the pick of the game’s best players, but many of the Polynesian stars who are eligible for Origin may not necessarily make themselves available for the Kangaroos.

Meninga wants them to pledge their allegiance before the squads are named, rather than waiting to see which country picks them first.

“Let’s be sensible about this; say who you want to play for early in the piece and that allows the coach that takes on a national squad to have as much preparation as they possibly can get. The teams will be better prepared and we’ll have a better World Cup because of it.

Rugby League World Cup 2021 chief executive Jon Dutton is in Australia meeting with players, clubs and other stakeholders ahead of the 16-team, 61-game tournament. One of his tasks will be to lock down an Australian broadcast partner, although all of the other major commercial partners have recommitted despite the tournament being delayed a year.

Dutton says the unpredictability of results was one of the event’s greatest strengths.

“We are now seeing real, genuine contenders in the men’s tournament to lift the trophy,” he says. “What we saw in 2017 with Tonga was a really pivotal moment, and it feels like Samoa are the next genuine contenders.

“It augurs well for a brilliant tournament. Who knows what will happen with the unscripted drama on the pitch?”

Watch the State of Origin exclusively live and free on Channel 9 and 9Now.