Gold Coast coach Stuart Dew would have been entitled to use a word that rhymes with ruck when his No.1 ruckman Jarrod Witts went down with an ACL injury against the Crows.

But he can take solace that he’s not the first coach this season singing Joni Mitchell’s famous lyric ‘you don’t know what you got ’til it’s gone’ when match committee began to discuss how they were going to approach the loss of their preferred ruckman. 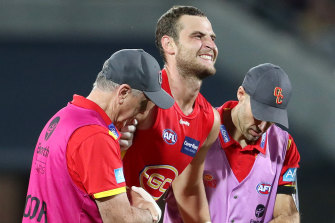 The Suns literally have no rucks. Essendon have lost Sam Draper. St Kilda have not seen Rowan Marshall or Paddy Ryder in the first three rounds.

Calling Greater Western Sydney the Giants is a bit of a cruel joke, with only gallant but inexperienced Irishman Matthew Flynn available. 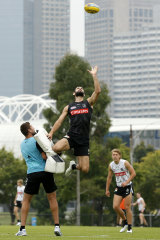 Collingwood star Brodie Grundy in action at training ahead of Collingwood’s clash with the Giants.Credit:Getty Images

The Lions have missed Oscar McInerney, with no Big O leaving one big hole in their line-up.

The truth is things have become so awful at other clubs that Richmond coach Damien Hardwick is suggesting they can have one of the Tigers’ big men (buyer beware, he recommended a bloke called Samson who is probably one haircut away from losing form).

Collingwood coach Nathan Buckley was unequivocal in his view on Wednesday: “Ruckmen and the ruck role is crucial.”

But those who know the craft best – ruckmen – said although the situation is not ideal, all is not lost for clubs whose ruckmen have disappeared, with fewer stoppages also helping to alleviate the crisis.

“It can sometimes make it easier, in a way, to set up because you know who is going to win the hit out,” McIntosh said.

“You have more of a defensive mindset as you are just reading the opposition ruckmen.”

His instinct is to throw every idea on the table, indicating that Suns would be entitled to consider throwing Hugh Greenwood into the fray against Carlton’s Marc Pittonet.

“If you have someone young and raw who isn’t quite ready then you are probably better off giving away the hit out and have someone who can compete at ground level, and then give you something else around the ground to compete in other ways,” McIntosh said.

And midfields can gain confidence and energy knowing that everyone expects one-way traffic.

“There is a lot more pressure on the supposed dominant ruckman to actually perform because they are expected to dominate. If the other guy starts to get their hand on it around the ground they are going to become the story of the game,” McIntosh said.

Former Fitzroy and Port Adelaide ruckman Matt Primus says it’s therefore incumbent on the favoured ruckman to ask questions of the opposition. He agrees the pressure can build on a ruckman if their midfield is getting beaten or breaking even. The former Power coach and Suns assistant said there are ways teams without a ruckman can make life hard for their opposition.

“You might send a forward in as an extra on-baller, might go wing-on-wing and try to make it a real man-on-man battle with no easy outlets, so if anything it is a quick kick which you can defend a lot easier than a nice chain or nice movement out of there,” Primus said.

Primus said the Bulldogs’ midfield functions well, regardless of whether their ruckman is winning.

“Their midfielders are always on the move, they are changing all the time so they make it hard for the opposition to block space and create areas where they can hit the ball to,” Primus said.

The challenges likely to face the Suns, the Bombers, the Saints and the Giants again this week are huge.

“It is a fascinating watch,” Primus said.

Tags: be, can, easier, It, sometimes
You may also like
Latest Posts