New Zealand Chanel Harris-Tavita has been hailed for his toughness after playing 45 minutes with a ruptured testicle.

No player was feeling worse after the 70-10 Anzac Day drubbing in Melbourne than Harris-Tavita, who underwent surgery this week and will be sidelined for almost a month.

Warriors CEO Cameron George could not begin to imagine the pain Harris-Tavita would have felt, but his toughness was already well appreciated at the club.

The five-eighth tackled Storm fullback Ryan Papenhuyzen before Warriors teammate Josh Curran’s knee landed in his groin area. Harris-Tavita came out and made eight more tackles in the second half.

Tyson Frizell missed three weeks after he lacerated a testicle in the opening round of 2019 while playing for St George Illawarra, while a crushed testicle ultimately forced former Parramatta hooker Kaysa Pritchard into retirement at just 25.

“Chanel could hardly move, the poor bugger,” George told the Herald. “It makes every man wince let alone going on to play another half of footy. 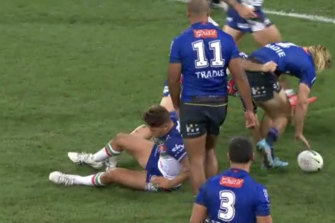 Chanel Harris-Tavita went down in the 35th minute on Monday night.

“He eventually got back and kept pushing through. I spoke to him on Thursday and he was getting prepared for surgery. He’s pulled up fine today and is in recovery mode.

“Anyone who can walk let alone run – let alone play rugby league at the elite level – with that, he didn’t miss a beat, and that’s full credit to him. He’s a tough bugger.

“He means a lot to our club, and whilst it looked a Superman-like approach, it’s no surprise to us because we see what he does say in day out.”

Harris-Tavita is off contract at the end of the season and despite being offered a deal by the Warriors is holding out for a something more lucrative.

Frizell was initially ruled out for six weeks but returned in half that time, and felt more comfortable wearing a protective cup for peace of mind when he did return for the Dragons and NSW that year.

The club’s head of performance Dave Ballard said: “We saw Payne this morning in at the club and he has pulled up OK, but again we will have to see how it settles down over the coming days. His preparation for next week’s game will be adjusted to maximise his chances of playing but we will not be taking any risks.”

A call on St George Illawarra’s Jack Bird’s availability will be made after Saturday’s captain’s run. Bird suffered an arm injury in the Anzac Day win over the Sydney Roosters.

And Wests Tigers co-captain Ken Maumalo looks set to be ruled out of the Dragons clash with an on-going knee injury.