Lance Franklin has hinted that he could extend his glittering AFL career beyond 2022 if his body lets him, admitting the prospect of premiership glory with the Sydney Swans could be too strong to resist.

Franklin fronted a rare press conference on Thursday morning – his first since 2019, before the string of soft-tissue injuries that threatened his career and his ability to see out the remainder of his rich contract with the Swans. 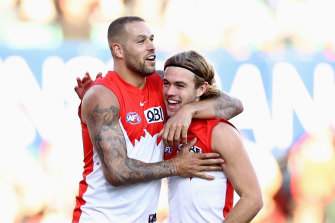 Lance Franklin’s contract expires at the end of next year – but could he play on into 2023?Credit:Getty

Franklin’s contract expires at the end of next year, but said he was not motivated by the many critics who doubted whether he would actually see out the nine-season, $10 million agreement he penned with Sydney after leaving Hawthorn at the end of 2013.

However, he admitted he was open to the prospect of playing on in 2023, by which stage the new-look Swans, who host Carlton at the SCG on Sunday, could be right in the middle of an open premiership window.

“I’m just focusing on what I’ve got to do this year and then next, and we’ll come to a decision when the time’s right,” he said.

“It’d be nice – if my body’s holding up and I’m feeling good, then we’ll have that chat. I just need my body to hold up. There’s a lot of great young talent at this football club and it’d be great to go all the way with them.

“With last year, with the injuries we had it meant we gave a lot of kids opportunities and they really grabbed it with two hands.

“And they’ve really gone on with it again this year, we’ve seen so many kids come through – but it’s not only the young kids playing good football, the senior guys are playing consistently and the young boys follow in their footsteps.”

Franklin, however, is not buying into the building hype around his march to 1000 career goals, a milestone that he is just 37 majors away from reaching.

The veteran forward said he had not even given himself a moment to absorb what it would mean to become just the sixth player in VFL/AFL history to get there.

“That’s not my focus at the moment,” Franklin said.

“My focus is playing and winning. If that happens, it happens. For me it’s more about playing, playing consistently, winning and getting the club back to finals.

“I haven’t thought about it at all. It is what it is. We get on with it, focus on Carlton this weekend and hopefully get the win.

Tags: ‘It’d, be, Buddy, could, Nice, pl
You may also like
Latest Posts