Western Bulldogs coach Luke Beveridge says he was disappointed that a video of his players having post-match beers was posted on social media but said the celebration highlighted the maturity of his playing group heading into next week’s AFL grand final.

The Bulldogs were full of joy after advancing to the decider last Saturday night at the Adelaide Oval, and the lights were dimmed in the dressing room post match when they raucously sang along and had what Beveridge says were mid-strength beers.

However, he was disappointed that a staff member not only filmed the celebration but then went public with it, providing an unnecessary but brief distraction in their lead up to meeting Melbourne in Saturday week’s showpiece event in Perth.

“I am not upset, but we are disappointed, yeah. It’s an internal thing. Unfortunately, it was a staff member. Phones shouldn’t be used to record our players in the dressingroom and, definitely, shouldn’t be sent to anyone,” Beveridge said on Thursday.

The footage shows there were multiple players and staff who filmed the celebrations.

“We are disappointed. Has it caused any untold problems? No. I am OK with people knowing when we achieve a little milestone, when we create a significant memory on our timeline, that we celebrate it,” Beveridge said. 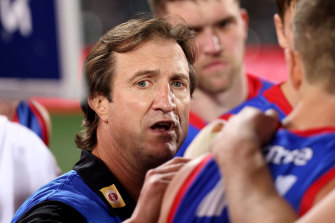 “The game can’t be too clinical. We have got to make sure we enjoy the times together, that helps you for your next challenge and next mini project. We will live and learn as a group and, hopefully, it doesn’t happen again.”

It has been a pandemic-affected season and the Bulldogs have travelled more than 10,000 kilometres through Tasmania, Brisbane, Adelaide and Perth and been stuck in quarantine without their families during the finals. Beveridge said under the leadership of skipper Marcus Bontempelli an alcoholic drink in this highly professional era was not an issue.

“I feel like, led by Marcus, multiple lieutenants and players displaying leadership in our club feel we are in a really good place to be mature enough to do these sorts of things,” he said.

“There is a lot at stake, absolutely, for everyone, but it is a fairly easy decision to make to condone that that’s going to be OK. Let’s have a mid-strength beer, I might add, it’s OK to do that … one or two beers after the game is not going to effect things too much. And, obviously, the boys who might have an injury, a corkie or soft-tissue injury, then they wouldn’t be having a beer, they would be having a water or a soft drink.”

Club chief executive Ameet Bains and football-department boss Chris Grant are with the team and also keeping on eye on matters.

Those on the soft drinks would have included Stefan Martin (ankle), Alex Keath (hamstring), Cody Weightman (concussion) and Laitham Vandermeer (hamstring tightness after a knock to the gluteal muscles), who Beveridge said were progressing “pretty well” this week.

However, he insisted the Bulldogs would have been “well-prepared” for a grand final this weekend had they not had the bye. He said the fact that many at the club had been through the 2016 premiership campaign was a benefit, regardless that this grand final was not at the MCG.

The Bulldogs will have a solid training session on Saturday, but not a scratch match like the Demons, and will emerge from quarantine in Perth on Sunday, allowing some WA-born players to visit their families.

Beveridge is always on the hunt for a theme to inspire his side. There are week-to-week themes, and “a more global theme” for the year, although he is tight-lipped when it comes to detailing these. But is clear that the Bulldogs’ ability to overcome all manner of obstacles this season has meant players and staff are now inspiring each other.

“I think when you become your own inspiration, when you start to do things that inspire yourselves internally, it becomes more powerful than grabbing something from the outside,” Beveridge said.

“There is a little bit of that going on.”

Tags: 'It's, an, Beve, internal, thing’:
You may also like
Latest Posts