Embattled Bulldogs chair Lynne Anderson and two other board members are expected to stand down on Wednesday, a week after a faction of the club's angry sponsors and voting members formalised a coup to overthrow them.

The Herald has been told by sources with knowledge of the situation that Anderson, the daughter of Bulldogs godfather Peter "Bullfrog" Moore, is tipped to confirm she will part ways with the club. 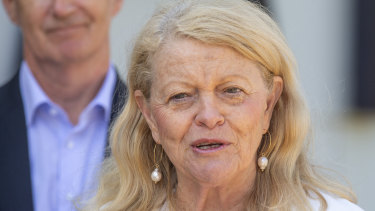 She will join former premiership winner Paul Dunn and John Ballesty in leaving the board. The club is expected to release a statement to confirm the exit.

Anderson, Dunn and Ballesty faced being subjected to an extraordinary general meeting after 116 signatures were handed to chief executive Andrew Hill last Tuesday.

Dunn said last week if he left the club it would be in a “much better position than what I found it in”.

Sources close to the board said Anderson didn't want to drag the club through a potentially toxic EGM, which was triggered by unhappy club sponsors and voting members.

The board changes will again raise questions about the club's recently signed major sponsorship with Laundy Hotels. The business has threatened to walk away from the club due to the political infighting.

The remaining four members on the football club board are Joe Thomas, John Khoury, Adrian Turner and Peter Mortimer.

Anderson led a ticket which swept to power in early 2018, dethroning longtime chairman Ray Dib. She had vowed to rebuild the club and told supporters it would take until 2021 for the Bulldogs to have salary cap space to target free agents.

Tags: 'It's, and, boss, Bulldogs, over, T
You may also like
Latest Posts