Josh Reynolds has thanked the NRL for allowing him to play while his domestic violence court case is pending, declaring: “I know I have done nothing wrong.”

The integrity unit opted against suspending Reynolds after he was charged with assault occasioning actual bodily harm on his ex-partner, Arabella Del Busso, in September. The Wests Tigers playmaker, who played in last night’s trial loss to Penrith, has pleaded not guilty. 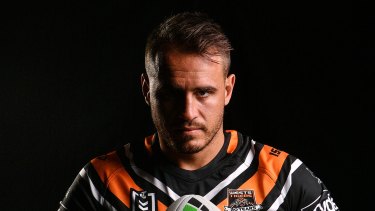 Josh Reynolds is grateful to be playing while his court case is pending.Credit:NRL Photos

“I was really hoping they would come with me because I was on the front foot, I had nothing to hide, and I never have.”

Asked if it was a difficult decision to speak to head office, Reynolds said: “Not tough at all, to be honest. I know I have done nothing wrong.

“It was just me making sure I had everything covered because I had a bad feeling. It didn’t go well. I’m just happy to be back playing footy because it’s what I love doing.”

“Even if you haven't done the wrong thing and you're hiding, nothing good's going to come of it, you know.

A few things, whatever was going on, whatever I done and didn't do, I went there and told them. They can't say ‘Well you didn't tell me this or that.’

“I think in the end, I definitely push for players to go and tell them because in the end, if you haven't done anything wrong, they'll hopefully support you.”

Reynolds has been a headline magnet through his career. For the most part, the 30-year-old has been able to compartmentalise his on and off-field issues, but the latest incident hasn’t been as easy.

“I'm not going to lie. This has probably been the hardest,” he said.

Reynolds is hoping aiming to earn the No.9 jersey vacated by Robbie Farah for the   opening round clash against St George Illawarra.

“I'd love to, 100 per cent,” he said. “That's what I'm striving for. I just want to be a part of this team. I've got a really, really good feeling that we're moving in the right direction. The culture and everything is really good.”

Tags: 'I've, done, nothing, Rey, wrong':
You may also like
Latest Posts