Jack Welsby had just turned three when St Helens captain James Roby made his debut in 2004.

On Saturday at Wembley, the pair combined to secure Saints’ first Challenge Cup win for 13 years, confirming another golden era in the club’s illustrious history.

Kristian Woolf’s side will now bid to clinch a ‘three-peat’ with a third successive Super League title. 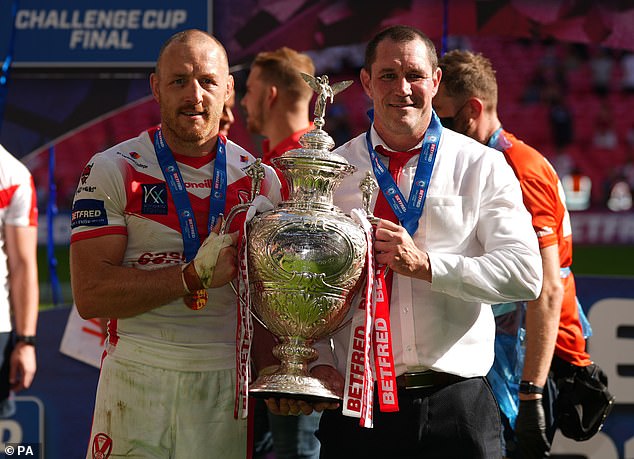 Whether Roby, 35, will continue his remarkable playing career into a 19th season remains to be seen but he is still the heartbeat of a star-studded side.

When the hooker does finally retire, watching St Helens without Roby will be like going to Paris and not seeing the Eiffel Tower.

‘I’m still undecided on next year,’ said Roby, whose second-half try turned the game in his side’s favour. ‘On the one hand, you could say it would be nice to finish on a high at the end of this season. On the other, why finish when there are more trophies to win?

‘It’s a tough one but I’ll sit down with the club and decide.’

Welsby’s dramatic late try secured victory in last season’s Grand Final against Wigan and he underlined his talent again with a fine display off the bench.

The 20-year-old, whose run and pass created an important try for Tommy Makinson, said: ‘It was a special day and one the fans have waited a long time for.’