Collingwood’s most famous supporter was honoured at the club’s annual general meeting on Wednesday night on an evening during which five 2010 premiership players were made life members of the Magpies and president Eddie McGuire was re-elected unopposed.

The iconic Jeff ‘Joffa’ Corfe received a special services award for his contribution to Collingwood, while 2010 flag quintet Darren Jolly, Sharrod Wellingham, Dale Thomas, Tyson Goldsack and Jarryd Blair were all made life members of the club, as was 93-game defender Ian Cooper.

McGuire and vice-president Mark Korda’s stints on the board were both extended for a further three years. McGuire has been president of the club since 1998, meaning he will have served for almost a quarter of a century by the time his next term ends. 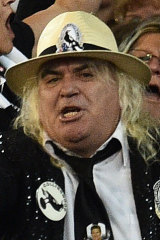 “When we sing ‘hear the barrackers a shouting’ in our song I reckon most of us think of Joffa,” McGuire said.

“He has been the face of the Collingwood cheer squad for over 20 years. I doubt there has ever been a louder or more passionate supporter. If you don’t hear him you can see him in his famous gold jacket, which is possibly the only thing louder than his voice.

“Joffa has been a great promoter of the club’s community causes – Bring a Blanket Day and Magpie Nest, amongst others – and has always been available to tell the story of our club and what it means to him. He is a wonderful Collingwood person.”

On accepting his life membership, former ruckman Jolly detailed the harrowing personal challenges he had dealt with in recent years, including business troubles and the break-up of his family life. Jolly revealed at The Glasshouse that he had spent time in a mental health facility, saying that he hoped others would benefit from his experiences.

Thomas thanked Magpies supporters for the support they gave him during his career before he left for Carlton at the end of 2013.

Tags: 'Joffa', at, Collingwoo, honoured
You may also like
Latest Posts